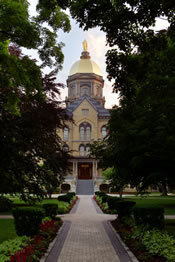 The RM Liu Foundation has made a gift to the University of Notre Dame to endow a new Institute for Asia and Asian Studies.

Based in Gardena, Calif., the foundation supports the philanthropic activities of Robert and Mimi Liu and their children, Emily and Justin, both of whom are Notre Dame graduates.

“We are expanding the international dimensions of Notre Dame in many ways, and Asia is an especially important part of our plan,” says Rev. John I. Jenkins, C.S.C., the University’s president. “This significant gift will allow us to enhance our current initiatives and to grow in new and exciting directions. We are deeply grateful to Bob, Mimi, Emily, and Justin for their visionary leadership and extraordinarily generous support.”

Speaking on behalf of his family, Justin Liu says: “We are honored to have the opportunity to establish and support the creation of the Liu Institute. Notre Dame provided Emily and me with an education and an overall learning experience that really shaped who we are today. Notre Dame has had an enormous impact on our family in so many ways, and we feel compelled and honored to give back to the University so that the student experience and opportunities for learning can continue to expand.

“If our goal is to prepare students for the world that faces them when they graduate, then understanding Asia is an absolute necessity. The role and impact Asia has on all of us, both directly and indirectly, is enormous and will continue to remain relevant at least through our lifetimes. Our goal is to establish a world class, renowned, and multi-disciplinary institute that leverages Notre Dame’s strengths and that is consistent with the University’s overarching mission.”

Since the creation of the Center for Asian Studies in 1997, Notre Dame has placed increasing emphasis on various initiatives in Asia. In 2003, the University established an Asian Studies Advisory Board—of which Justin Liu is a member—and in 2005 a provost-appointed Task Force on Asian Studies was created to undertake a systematic analysis of the opportunities, costs, risks, rewards, and priorities associated with a greater Notre Dame investment in Asian studies. In a 2006 report, the task force recommended directing new resources toward creating a centralized infrastructure to enhance the University’s portfolio of scholarship and programming in Asian studies.

The result is the Institute for Asia and Asian Studies, which will focus on four core pursuits:

Other recent Notre Dame initiatives in regard to Asian studies are:

International studies and global interaction as a whole are central to Notre Dame’s aspirations. The University’s current strategic plan, “Fulfilling the Promise,” delineates four pillars upon which it is building, including a commitment to diversity and internationalism. The recent appointment of J. Nicholas Entrikin, a professor of sociology, as the first associate provost and vice president for internationalization is testament to that objective.

The Liu family has been actively engaged with Notre Dame since the early 1990s.

Emily Liu earned a bachelor’s degree in psychology from the University in 1994. She is a past member of the University’s Asian Pacific Alumni Board of Directors and serves as executive director of the family’s foundation.

Justin Liu earned a bachelor’s degree in finance from Notre Dame in 2000 and is a member of the College of Arts and Letters Advisory Council in addition to serving on the Asian Studies Advisory Board. He is president of the RM Liu Foundation and chief operating officer of Tireco Inc.

Robert Liu is chairman and founder of Tireco, one of North America’s largest importers and private brand marketers of tires and tire-related products from Asia. He serves as the foundation’s vice president and his wife, Mimi, is its secretary treasurer.

The Liu family’s endowment of Notre Dame’s Institute for Asia and Asian Studies is in honor of Robert Liu’s father, a legendary general in the Chinese army during World War II, during which he rescued 7,000 British and 500 American soldiers from Japanese captivity in Burma.

“Establishing the institute allows us to preserve our family’s history and legacy for future generations,” said Justin Liu. “My grandfather’s actions have been recognized throughout the world, and it was important to our family to honor him in a permanent way moving forward. By working with Notre Dame, with its long and prestigious history and the strength of its moral character, our family has found the perfect fit that allows us to preserve that legacy.”

The Lius previously funded the Liu Family Endowment for Excellence in Support of Asian Studies and Asian and Asian-American Students. This endowment has supported:

The RM Liu Foundation gift is a component of the University’s $1.5 billion Spirit of Notre Dame. Announced in 2007 and continuing to 2011, Spirit is the most comprehensive campaign ever undertaken by the University and the largest fund-raising effort in the history of Catholic higher education. The campaign goal was surpassed in June 2009.