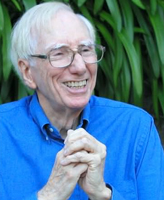 “He is a living exemplar of the sociology of religion as a discipline, one whose current work is in dialogue with the earlier founders of the discipline—Durkheim and Weber.”

Jensen, who studied under Bellah at U.C. Berkeley, says he has long been interested in bringing him in to speak at Notre Dame. As it turns out, the interest was mutual.

When Jensen called to invite him, Bellah remarked that Notre Dame’s Center for the Study of Religion and Society was “one of the top places in the country for the study of the sociology of religion,” adding that he admired the work that Christian Smith and his colleagues were doing here, Jensen says.

Smith, the William R. Kenan Jr. Professor of Sociology in Notre Dame’s College of Arts and Letters, is a concurrent professor in the Department of Theology and director of both the Center for the Study of Religion and Society and the Center for Social Research, as well as the Science of Generosity initiative.

“Bob Bellah is an icon of big-thinking sociology in the second half of the 20th century,” Smith says. “His work on religion, Asia, American culture, and beyond has been fantastically influential, and he continues to produce expansive ideas in his books today.

“I have personally been much influenced by his scholarship, so it is a real honor and pleasure to be able to host him for a visit to Notre Dame.”

Bellah’s many honors include the National Humanities Medal, which President Bill Clinton awarded him in 2000, and the American Academy of Religion’s Martin E. Marty Award for the Public Understanding of Religion.

Although he is most well known for his work in the sociology of religion, Bellah began his career as a scholar of Japan. His first book, Tokugawa Religion and a more recent collection of essays, Imagining Japan, focus on this society’s cultural roots in relation to modernity.

During a recent interview with Cole Carnesecca, a Ph.D. student in Notre Dame’s Department of Sociology, Bellah explained the transition. As a Fulbright Scholar in Japan in 1960, he says, he felt a duty to help explain the role of religion in political practice and discourse in America, particularly given the experience of public religion in Japan at that time. This effort led to a dramatic shift in his research agenda—a “30-year hijacking,” as Bellah calls it—and to a series of works that became his most famous.

Bellah’s books on the sociology of religion—Civil Religion in America, Beyond Belief, The Broken Covenant, Habits of the Heart, and The Good Society—have shaped the discipline.

His most recent book continues and enriches that tradition. “Religion in Human Evolution is a way of applying Bellah’s earlier theories on religious evolution to a larger, longitudinal study of human development,” says Jensen. “Bellah argues that throughout history, humans have demonstrated an adaptive biological need to connect with the divine. As humans evolved from the lower stirrings of life, there was a natural inclination toward these matters of mystery, an urgency for meaning that may be answered by religious behavior.”

Jensen notes that this lecture is not just for scholars in sociology or in his own field of East Asian studies. “Bellah addresses these issues so broadly that it would benefit anyone interested in or studying religion in human society,” he says.

This will be Bellah’s first visit to the University of Notre Dame. According to Carnesecca, Bellah says that he has found many intellectual friends among Catholic thinkers and sees Notre Dame as a “natural environment.”

Bellah will present “The Modern Project in Light of Human Evolution” at 4:30 p.m. on Tuesday, March 19, 2013, in the Notre Dame Conference Center at McKenna Hall, to be followed by a public reception in the atrium at 6 p.m. On Wednesday, March 20, the University will host a public discussion and breakfast with Bellah at 9 a.m. also in McKenna Hall.