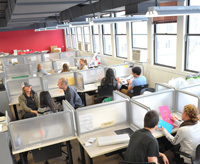 Design students at Notre Dame now have a new place in which to learn, create, and collaborate. The recently refurbished West Lake Hall is now fitted with dynamic classroom spaces, computer labs, offices, and display areas for the graphic and industrial design programs in the College of Arts and Letters.

Although Riley Hall is still the primary home of the Department of Art, Art History, and Design—and long-term plans include reuniting the department in a new art building—a number of classes and much of the design work students did in Riley Hall have now been moved to renovated space in West Lake.

“We just have more—and better—spaces.” 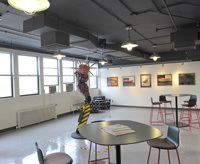 The building now features open classrooms, workspace, and a central meeting and exhibition space, the Cregg Commons, named in honor of Marty Cregg ’73, president and CEO of ChaseDesign in New York, whose generous gift funded the renovation.

Also new is a model shop, which is located next to West Lake Hall and has a laser cutter and computer numerical control machine that is used to mill hard materials. 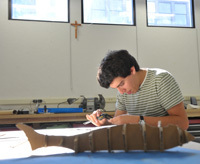 “Right now, our model shop is the most magnificent addition and probably the most important change we have,” Down says. “We’re finding people in all areas of design—industrial and graphic—are using the shop much more.”

Senior Breanna Stachowski, who recently took third in the International Housewares Association Student Design Competition, is one of those students.

“A lot of Stachowski’s design was done in the new model shop,” Down says, noting that “we didn’t have the capacity to do it nearly as efficiently prior to the renovation.” 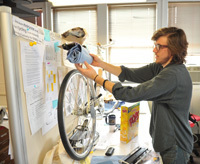 “The new shop is much better,” he says. “It helps enable a lot more prototype work and better construction. It was great to have those resources.”

Another key benefit of the West Lake renovation is the increased computer lab space for designers—now quadruple what was available previously, Down says. “We have two new computer labs, one which facilitates mostly graphic design students and the other which accommodates industrial design and some high-end motion graphics.” 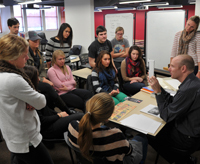 The look and feel of the hall itself is also critical to designers. West Lake now features open workspaces, bold colors on different walls, prominent displays of past work, and many large windows.

“I really enjoy the natural light in every room,” Bennett says.

As part of the renovation, the building’s drop ceilings were also removed, Down says. “This gives a greater feeling of spaciousness and creates more of the look and culture of design, as opposed to the office look that it had before, kind of cramped and closed in.”

This particular change has the very practical benefit of allowing plenty of vertical space for taller projects, he adds. 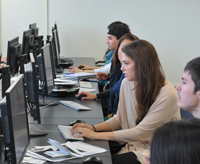 Students point to one last happy result of the upgrade facilities: increased collaboration between students in graphic and industrial design.

“Last year, industrial design was in the basement of Reilly and graphic design was on the second floor,” Bennett says. “Now we’re both working on the same floor, so we see each other in the hallways. I think the camaraderie between the programs has been bolstered.”

Sophomore graphic design major Keri O’Mara agrees. “There’s definitely more of a community and interaction among design majors now that we have a facility that’s dedicated just to design,” she says.

“Even just this year, I think it’s been helpful in making people realize how serious we are about the design program,” Bennett says. “Hopefully, it will also get people more excited about it.”