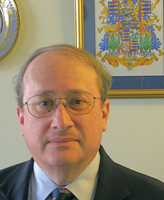 D’Arcy Jonathan Dacre Boulton, professor of the practice of medieval studies in the University of Notre Dame’s Medieval Institute and concurrent professor in the College of Arts and Letters’ Department of History, has been awarded the Queen Elizabeth II Diamond Jubilee Medal by the Governor General of Canada.

The medal was created to commemorate the 60th anniversary of Queen Elizabeth II’s accession to the throne as queen of Canada. It honors Canadian citizens or permanent residents who have made significant contributions to Canada or brought “great credit” to Canada for outstanding achievement abroad.

Boulton was honored for his work as a fellow of the Royal Heraldry Society of Canada, several of whose members received Diamond Jubilee Medals for promoting the correct understanding and use of heraldic emblems in Canada.

“My contribution to this,” he says, “was through my scholarly writings in the society’s two journals and my foundation and editorship of the society’s academic journal Alta Studia Heraldica.” 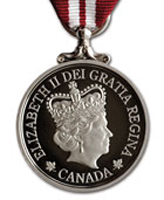 Boulton says he will wear his medal with great pride. “As a Canadian who has lived for nearly 40 years as an expatriate, and as a devoted subject of Her Majesty the Queen of Canada, I feel considerable pleasure both in being recognized at all in my own country and, more especially, receiving a distinction from the queen created to honor her reign.”

As a historian, Boulton specializes in the cultural history of the nobilities of Latin Europe, especially France and England. He has published extensively on knighthood and knightly orders, on the practices of conferring noble status and lordly rank, and on the use and codification of what are commonly called “heraldic” emblems and insignia.

Boulton is currently editing a book on the history of heraldic emblems in Europe up to the 17th century.

“This is being written under my direction by a team of more than 50 scholars representing all different lands and languages,” he says. “It was commissioned by Brill, the principal academic press of the Netherlands, and the collaborators are, for the most part, fellow academicians or fellows of the International Heraldic Academy based in Paris and Switzerland.

“I am currently the only full academician residing in the United States, so my leadership of this project is a sign of European respect for North American scholarship and broad-mindedness.”

Boulton says it is his scholarly focus on the history of honors, including medals, that makes this award particularly special to him. “It is nice to have one of my own,” he says.