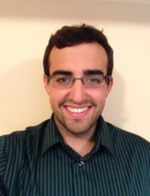 Because Shane Kelly ’14 began his undergraduate education intending to go to graduate school in psychology, he knew he should get involved in research at Notre Dame as soon as possible. So when Associate Professor James Brockmole offered him a research assistant position in his Visual Cognition Lab, Kelly jumped at the opportunity.

“It turned out to be a great decision and I enjoyed cognitive psychology and working in the Visual Cognition Lab immediately,” Kelly said.

Brockmole’s research focuses on how people remember visual information including objects and scenes. Kelly quickly got involved in projects exploring how a person’s actions within an environment might change what he or she remembers about that setting.

For his senior thesis, Kelly decided to test whether holding an object causes us to remember it differently than we would if we just looked at it. With Brockmole’s help and support from an Undergraduate Research Opportunity Program (UROP) grant, he designed an experiment over the summer and implemented it during his senior year.

“We concluded that holding an object biases people to pay more attention to action-relevant features and less attention to action-irrelevant features,” Kelly said. “In this case, an object’s orientation will determine how we might pick up that object, but an object’s color isn’t usually important for determining things like reach or grip. In the brain, this distinction is made by processing visual information along two main pathways. Our results suggest that holding an object shifts resources toward the magnocellular pathway (which processes orientation) and away from the parvocellular pathway (which processes color).”

Kelly’s thesis, “Hand Proximity Differentially Affects Visual Working Memory for Color and Orientation in a Binding Task,” was later published in the peer-reviewed journal Frontiers in Psychology with Brockmole as a co-author. The paper also won the Bernoulli Award, which recognizes exceptional Notre Dame undergraduate research papers that use statistical methods to answer original, important, and timely questions in any field of study.

Kelly, who is now a doctoral student at George Mason University, said conducting research as an undergraduate helped him both determine his career path and get into the graduate school of his choice.

“The whole process made me realize that research in cognitive psychology is what I wanted to pursue as a graduate student,” Kelly said. “This helped me choose which schools I applied to and which professors I wanted to work with.”

Brockmole said Kelly’s success stemmed from taking advantage of the multiple research opportunities available to undergraduates in the Department of Psychology, working closely with his professors, and taking the initiative to develop his own projects.

“Shane spent a lot of time during his sophomore and junior years reading and asking questions in lab meetings,” Brockmole said. “Eventually, he started to ask himself questions like, ‘Is there another way to approach this problem?’ and ‘Has anyone ever studied this issue before?’ By his senior year, Shane not only formulated questions that were interesting to him, but also the reasons why the answers would be interesting to other people.

“When students can do that, their independent research or senior thesis projects bloom.”

Brockmole said students who want to do research should also take advantage of the many opportunities for research grants at Notre Dame, including UROP and the Center for Undergraduate Scholarly Engagement (CUSE). He emphasized that these programs not only provide students with funding, but also help them express their ideas clearly.

“The grant application process requires students to think clearly about what they want to do, because from the very beginning of their project they have to be able to explain it to somebody else,” Brockmole said.

“If that’s a skill that students can acquire before they actually start the thesis project, it really puts them on the path to success.”