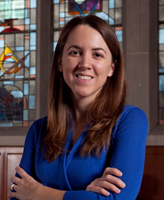 Ann Johnson, a doctoral candidate in Notre Dame’s clinical psychology program, recently won a Graduate Research Scholarship from the American Psychological Foundation and the Council of Graduate Departments of Psychology.

“The competition for such awards is considerable, and it is a real tribute to Ann that her research was recognized,” says Daniel Lapsley, professor and chair of the Department of Psychology.

One of 13 winners selected from across the country, Johnson says the scholarship will help cover costs related to her dissertation, “Determining the Effects of Acute Stress on Executive Functioning Among Children with Attention-Deficit/Hyperactivity Disorder and Disruptive Behavior Disorders.”

More importantly, she says, the award “feels like a vote of confidence” in her research. “From a personal standpoint, that’s probably what’s most meaningful: to have my project seen as a worthwhile contribution to our field.”

As it relates to Johnson’s research, the term “executive functioning” refers to the thinking processes that allow people to exhibit goal-directed behavior and successfully complete tasks. She says previous studies have shown that stress can affect this thinking in individuals who do not have any specified disorder.

“What I’m interested in,” Johnson says, “is whether or not stress will have a different impact on the executive functioning of children with disruptive behavior disorders since these children typically do not show a response to stress, which is measured by the level of a stress hormone, cortisol.”

She notes that for many people, a certain amount of stress can actually be beneficial, as it can enhance their ability to focus. It’s not clear whether children with ADHD and/or disruptive behavior disorders such as Oppositional Defiant Disorder and Conduct Disorder experience the same benefit.

“This could be problematic in times of stress when these ‘thinking’ skills are the most needed,” Johnson says.

For her study, Johnson observes children ages 10–14 over a two-hour period, using traditional cognitive tests to examine their capacities in areas including verbal and visuospatial working memory. She also collects five saliva samples from each child at various points in his or her session and then sends them to an outside company to be analyzed so she can see how cortisol levels—and thus stress—fluctuate based on the tasks the child is performing.

“I think one of the most common misconceptions of children with ADHD and disruptive behavior disorders is that there is a purposeful, and at times even malicious, intent to their negative or detrimental actions,” Johnson says. “With children with ADHD especially, [there are] cognitive and behavioral impairments which may make tasks that parents and teachers ask them to do quite difficult.”

When Johnson receives her Ph.D. in August 2013, it will mark the culmination of a decade spent in Notre Dame’s College of Arts and Letters, one that began with her earning a B.A. in both English and psychology.

“It’s been great to be part of a program where research is so valued and to be able to consult with faculty whose interests are similar to my own,” says Johnson, who is advised by Associate Professor Brad Gibson.

“I know that my research has evolved and improved due to my contacts here.”