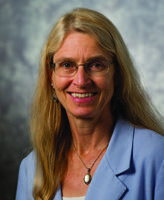 Professor Lee Anna Clark recently began work on a five-year study that will contribute to revolutionizing the way personality disorders are diagnosed and further cement Clark’s standing as one of the world’s preeminent research psychologists.

The study, funded through a $2 million grant from the National Institute of Mental Health, will expand on Clark’s previous work establishing a trait-based approach to diagnose personality disorders. The research will be conducted in partnership with Oaklawn Psychiatric Center, a local nonprofit mental health agency.

“Diagnosis is the first step toward treatment,” says Clark, William J. and Dorothy K. O’Neill Professor of Psychology at Notre Dame. “If we can figure out the components of personality disorder, then it should be easier to figure out how we can develop treatments that will address these different components.”

Clark joined the Department of Psychology’s faculty this fall, after 17 years at the University of Iowa. She recently was also voted president-elect of the Society for Research in Psychopathology.

Her personality research started in graduate school and coincided with the publication of the Diagnostic and Statistical Manual, 3rd edition (DSM). For the first time, the _DSM_—considered the “bible” for making psychiatric diagnoses—switched to a criteria-based approach to diagnose all mental disorders, and additionally highlighted personality disorder as requiring separate attention.

But despite this advance, Clark believed that applying the same model to diagnosing personality and other disorders was a mistake, so she set out to find a better method.

After 12 years of research, she published the Schedule for Non–adaptive and Adaptive Personality, or SNAP, a now widely used test that assesses disorders by measuring personality traits across the normal-abnormal spectrum.

“It’s proven to be a pretty good measure of personality traits in abnormal range,” Clark says. “But it’s not perfect. Now we need figure out what other traits are necessary.”

Her latest research will expand on the SNAP project, looking at what other traits should be measured. It also will study functioning—or why some people with extreme personality traits are adjusted and able to function well in society, while others are not.

The first two phases of the project include data gathering from patients at Oaklawn and from their adult friends and family. The last phase will be a preliminary test of how the assessment tool might work in a clinical setting, with physicians and psychologists invited to refer patients to the study. Clark and her collaborators will diagnose the patients and provide clinicians with the information, then follow up six months later to find out how useful it was.

Clark also is currently one of 11 members of the work group revising the Personality and Personality Disorders section of the DSM-5, which is due out in 2013. The group is proposing that the DSM switch the way personality disorders are diagnosed to a trait-based system. While the DSM-5 will use the existing system, Clark is hopeful her research will provide the information needed to make the change in the next revision.

Such a switch would be a validation of her lifetime of work. “The switch the DSM is making is very exciting for me,” she says. “What distinguishes my work over my career is that from the beginning, I said ‘We have to find a better way to do it.’”