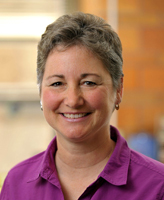 In an early job as a social worker for senior citizens, Cindy Bergeman began to wonder: Why did some of the people she worked with have such a positive attitude while others seemed so dreary? When faced with adversity or stress, why did some weather the storm better than others?

Bergeman, now a professor in Notre Dame’s Department of Psychology, has spent more than two decades pursuing the answers to those questions.

As a developmental psychologist, her research focuses on investigating patterns of variability and change in physical and psychological health across the lifespan and identifying the genetic and environmental factors that may influence that process.

Her major project is a decade-long investigation called the Notre Dame Study of Health and Well-Being, for which she recently received two grants totaling $3.3 million.

When complete, the study will provide some of the most detailed information to date about human beings’ ability to deal with stress and adversity throughout life, and the impact that has on physical and mental health.

“It’s a tremendous amount of data,” Bergeman says. “We’re bringing together a lot of very interesting threads of research into a single study that will allow us to get a snapshot of people and to follow their lives over time.”

The National Institute on Aging (NIA), which helped launch the study five years ago, has now awarded Bergeman $3.1 million, five-year grant to continue work on the project, while a new, $200,000 grant from the John Templeton Foundation will fund related research looking at the role of spirituality and religion in dealing with stress.

The Notre Dame Study of Health and Well-Being started in 2006, looking at subjects age 60 to 75 from a five-county area of Northern Indiana. It had three components.

Bergeman determined early on, however, that the study would not be complete without research involving a middle-age cohort.

“It’s a lifetime of developing strategies that allow you to deal with adversity,” she says.

Bergeman sought and received additional funding from NIA in the second year of the study to add subjects age 40 to 59. With NIA’s latest grant, she will continue with the existing group of midlife and older participants and now add a cohort of younger people age 18 to 40.

When complete, the study will include 10 years of data on older participants, nine years on the midlife cohort, and five years on the younger subjects. In all, there will be almost 1,000 subjects.

On the Templeton grant, Bergeman will work with graduate student and co-principal investigator Brenda Whitehead.

That grant will fund collection of health data—including reviewing medical records, performing physical exams, and collecting blood from some participants—in order to get a better sense of their physical health. The research team will then compare that information with data from the 10-year study to help understand the impact of religion and spirituality in participants’ lives.