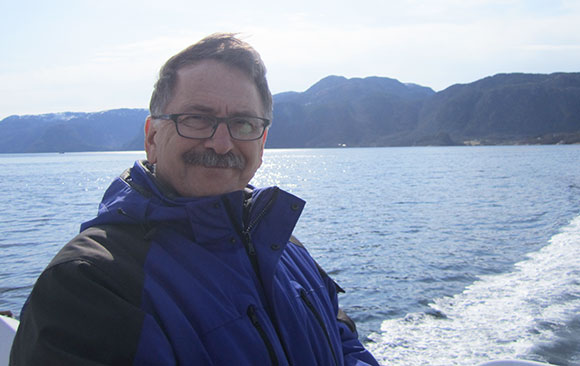 English Professor Tim Machan on a boat off the coast of Norway, where he used a Fulbright grant to explore the roots of the English language.
_________

Tim Machan believes the English language is far more than the order of letters and words.

It’s the highly personal, situational expressions we use to convey our ideas and feelings. It’s how we connect with or distance ourselves from everyone around us. We use it to define ourselves.

What Is English? And Why Should We Care?

Machan, a professor in Notre Dame’s Department of English, has spent 30 years researching and teaching English in its many forms and functions. His journey has pulled him further from grammatical conventions into how people around the world use English in their daily lives. He went in-depth for his 2013 book, What is English? And Why Should We Care?, to understand how the changing global landscape has and will be changed by English.

He uses the history of how English has been used—such as a story about his grandfather coming to the United States from Poland in the 1900s—as an instrument to illuminate the impact of the language.

Machan’s grandfather was part of a major influx of immigrants finding work in the automobile and other industries. The Ford Motor Co. set up its own English school to train its massive new workforce. Ford wanted to improve facility safety through communication and the immigrants wanted to become more American.

But through the promise of language, Machan points out, Ford crafted a dream for the workers that was unattainable.

“Workers thought they could be wealthy like those who got the office jobs, but the only ones who did were natives, Brits, or Germans,” he said. “They all had competing senses of what English is and what you can do with it. Workers believed that if they got a new accent, they’d get a new job. But accents aren’t easily changed, and we all get jobs, or not, for more than just our accents.” 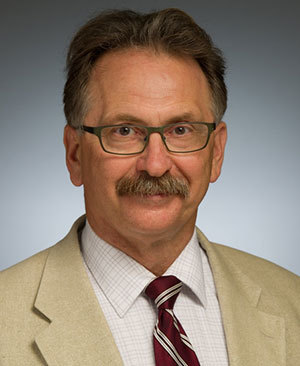 That disparity only grows with the globalization of English. With native English speakers now accounting for less than a third of all English speakers, linguistic issues will continue to emerge, Machan said.

Understanding we can’t always control and restrict language, he said, is a crucial first step to learn from history.

“There have been movements in the U.S., since President Ronald Reagan especially, to make English the official language,” he said. “One thing that has been left out is ‘What kind of English?’ What kind of words are we talking about? Not all of us use the same words or the same order. Context is everything. Anyone who’s met a junior high student knows you can’t regulate speech.”

Three years ago, Machan came to Notre Dame, where he has continued to thrive as both a scholar and a teacher. He has found Arts and Letters students’ deep interest in the material makes it possible to engage in way not possible within most university settings.

Not all of us use the same words or the same order. Context is everything. Anyone who’s met a junior high student knows you can’t regulate speech.” Tim Machan, professor of English 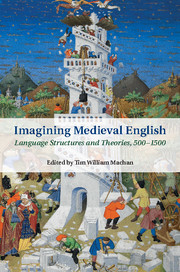 That passion for his work has landed him many grants and fellowships, including a grant from the Fulbright U.S. Scholar Program that sent him to Oslo, Norway, for a semester in spring 2014 to explore the roots of English.

The summer after he returned, he organized a three-day conference that brought together the leading scholars of medieval English, culminating in Imagining Medieval English: Language Structures and Theories, 500-1500, a collection of essays he edited. The work argues that what medieval English is depends in part on who’s looking at it—as well as how, when, and why it’s being looked at.

It’s the next step in his understanding of English as a global language, focusing on how a part of the world has come to define the history of its language. Phrases such as “Old English” are used as though they’re absolutes, but language doesn’t delineate so neatly—it’s far more malleable.

“When does Old English stop being English and become Old Norse?” Machan said. “How is it that people have defined the medieval ages linguistically, and why? In the book, we explore why we have become interested in making the past look like the present.”

As English spreads across the globe, he argues it will become more and more important to understand this history of how we have thought about language to guide us into the future.

For a region like Scandinavia, changes in cultural and linguistic characteristics of different time periods alter its own identity. In 1900, fewer than 5 percent of people there spoke English. Today, 90 to 95 percent do—a higher ratio and more people than in Connecticut or Iowa.

As this takes hold, residents in countries like Iceland worry their culture is eroding. When Microsoft products come only in English and not Icelandic, or Web pages only display in English, the ability to maintain the history and identity tied to a language becomes more and more difficult. Denmark at times aggressively restricts English just for this reason, he said.

What becomes clear is that the global evolution of the English language is impossible to predict. Machan only hopes that his History of English students walk away informed and aware that their definition of English may not be the same as the person they’re speaking with.