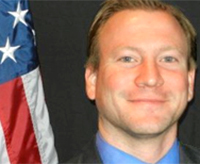 Notre Dame political science and peace studies alumnus Brian Klein ’08 not only served in the Peace Corps as a volunteer, he has made a career with the venerable service organization.

Created in 1961, the Peace Corps is a two-year volunteer program run by the United States government. Klein was appointed to a job as special assistant to Peace Corps Chief of Staff Stacy Rhodes in July 2013.

He previously worked in the Office of Third Goal and Returned Volunteer Services, a Peace Corps division that supports returned volunteers as they readjust to life in the United States and share their experiences with the American public, especially young people and community groups. The name of the office refers to the third goal of the Peace Corps, which is to strengthen Americans’ understanding of other countries and people.

“Among other things, engaging in Third Goal activities gives volunteers the opportunity to speak about and reflect on their experiences,” Klein says. “These experiences become even more meaningful when shared with others and incorporated into everyday life.”

In addition to his work with the Peace Corps, Klein serves as a consultant for the World Bank’s Africa Energy Unit, conducting research that supports energy-related projects in South Africa and Madagascar.

Klein served as a Peace Corps volunteer from 2010-12, working as an agroforestry extension agent in southeast Madagascar. While in Madagascar, Brian worked on development projects that focused on training villagers to grow nutrient-dense crops on deforested land.

His interest in environmental issues, international development and peace was sparked in part by his peace studies senior seminar course, which included reading and discussion about the management of natural resources in post-conflict societies.

“Peace studies was a perfect confluence of everything that interested me: the environment, sustainable development, human rights, politics and conflict resolution,” says Klein, who majored in political science and minored in peace studies. “It gave me a holistic lens for examining both conflict and reconciliation.”

Klein is one of many Arts and Letters alumni who have served in the Peace Corps. In 2013, for the 13th year in a row, the University of Notre Dame earned a spot on Peace Corps’ annual list of the top volunteer-producing midsized colleges and universities across the country.