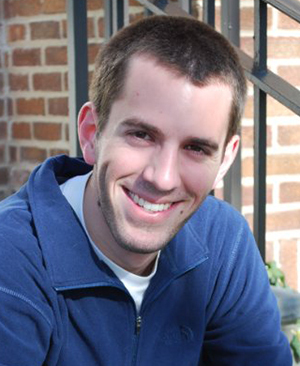 If you want to land a job in the political realm, it is very useful to have an internship first, said Adam Newman ’14.

And he should know. Newman, a political science major and business economics minor, completed a total of six internships, from private sector roles with the American Medical Association and PricewaterhouseCoopers to federal government positions with the Senate Health, Education, Labor and Pensions Committee and most recently—the White House.

“Entering the White House gates as an intern for the first time was a truly great moment. It is hard to describe the feeling of accomplishment and excitement all put into one.”

Newman began his position at the White House in January 2014, where he worked for the Domestic Policy Council’s health care team.

The team provides leadership to the executive branch as it implements the Affordable Care Act, as well as coordinating executive branch activities on public health issues with the American public, stakeholder groups, and state and local governments.

Inside the White House 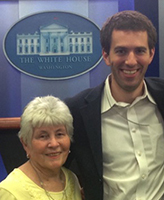 Adam Newman with his grandmother at the White House

Newman has had a longstanding interest in health care issues; in fact, five of his six internships were related to the health care field. His liberal arts education, he said, allowed him to explore the topic in greater depth.

“The Arts and Letters curriculum provided me with a level of flexibility I might not have had in other schools,” said Newman, who had previously been a finance major. “As a result of studying political science, I was able to spend more time on health care, especially with my senior thesis. This provided me the opportunity to get very deep in the weeds on certain health care issues and allowed me to learn more about the system in general.

“And my senior thesis on health care helped me stand out when the people at the White House read my resume.”

Once he had secured the internship, Newman was able to use those same research skills as he assisted White House staffers with various tasks, including investigating health care topics and writing memos. While there, he said he also gained valuable insights into the workings of the White House.

“What I discovered is that the White House does not have a large staff, and there is not much hierarchal space between those who spend every day with the President and the interns,” he said. “I also realized how dedicated the people are who work here, and how much they believe in President Obama’s agenda.

“The White House staff members are impressive, because most, if not all of them, could work for prestigious law firms and multiply their current salaries many times over. Instead, they have committed themselves to working to help the common good.” 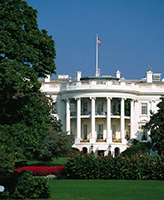 Newman, who also participated in the Career Center’s Notre Dame D.C. Mentoring Program, said that being able to connect with Notre Dame alumni in Washington has been tremendously valuable to him.

“I would argue that there are few—if any—universities that have an alumni network like Notre Dame’s,” he said.

“In D.C., the rule that ‘who you know matters just as much as what you know’ is completely true. You can send out hundreds of resumes in this city and not get any calls back. But if you reach out and get coffee with five Notre Dame graduates and ask them for career advice, many will try to help you out by connecting you to others, offering guidance, or even setting you up with potential interviews.”

“I made it a priority to meet with as many people one-on-one as I could,” he said. “I was most interested in their career progression and why they made the choices they did. It allowed me to get a better idea of what I want to do.”

In these discussions, Newman found that many staff members at the White House have worked in both the private and public sectors and moved between them multiple times during their careers—a path he would like to follow.

In August, he began a full-time position as a management consultant in the health care sector of PricewaterhouseCoopers in Chicago, where he works with provider groups, hospitals, pharmaceutical companies, and insurers on strategic and technical issues.

“I think that moving between public and private sectors will lead to a very interesting career,” he said, “ensuring that I am able to hone important leadership and management skills and, most importantly, serve the American people.”

No matter what his future holds, however, Newman said that his Arts and Letters education has given him a strong foundation and a new perspective.

“Notre Dame provided me with a new outlook on life, teaching me that you should not follow a career path—or do anything in life, for that matter—because it is safe, logical, or prestigious. You should do something because you find it fulfilling.”