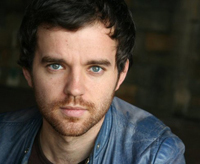 Dan O’Brien ’99 has always considered himself an actor and now he is a successful professional. As a lead on the NBC sitcom Whitney, he can share his passion for performance with all of America.

O’Brien says he did not major in theater at Notre Dame because he knew already that his passion was for acting and he was not particularly interested in the technical and behind-the-scenes work which the major entailed. Instead, he participated in the College of Arts and Letters’ Program of Liberal Studies and took as many acting classes as he could.

“I had the opportunity to attend performing arts schools on scholarships, but I wanted to go to Notre Dame,” he says. “I am a third-generation Notre Dame student. The school is of huge importance to my family and to me.”

After graduating, O’Brien began to seriously pursue his career as an actor. He moved to New York City and lived in a room he built out of two-by-fours in the basement of a building a friend owned. For three years, O’Brien worked unpaid acting jobs non-stop. In order to support himself while pursuing his career, he worked a large number of odd jobs as well. He even used his acting skills to help a private investigating firm catch people selling counterfeit goods in the city.

“I consider those years to be my graduate experience,” he says.

He had a great deal of success in New York’s theater community, even starting his own company, Black Rocking Chair Productions, with his wife, a playwright. Eventually, he performed in the Edinburgh Fringe Festival, the largest arts festival in the world, where he won a Scotsman Fringe First award. It was this success that launched him into a career of television commercials.

O’Brien can be seen in a Xerox commercial that airs during Notre Dame football games, in which he debates printing issues with a cardboard cutout of the Notre Dame Leprechaun.

“When I heard about the commercial, I thought to myself, ‘I have to get this. I can retire happily from TV commercials if I get this one’,” he said.

After his success in commercials, the Notre Dame family re-entered O’Brien’s life.

“A classmate from Notre Dame saw a Cingular commercial I did and found me on Facebook three years ago. She worked for the Creative Artists Agency and set me up with my manager,” he said. “In the acting business, you have to have a good manager to get good auditions.”

“When you audition for one part, you’re really auditioning for every part in town,” O’Brien says, explaining the casting process for Whitney.

Originally, he auditioned for a film titled Wanderlust, which will be released later this year. The casting director for the film also worked on casting Whitney, and O’Brien got the part and filmed the pilot last April. Now that NBC has picked up the show for the full season, he is in production again six days each week.

“I hope to continue acting on Whitney for a few more years. Then I plan to keep pursuing films and TV shows,” he says. “I also hope to work on producing some original pieces.”

While the Notre Dame connection has had a great impact on O’Brien’s career, from helping him find an agency to co-writing a screenplay with a fellow graduate, one of the most memorable moments of connection happened recently.

“When the guys on the crew found out that I was a Notre Dame guy, they started talking about what a huge Notre Dame fan their old friend George was,” he says. “They are all about 20 years older than me and worked on the set of Cheers. The George they were referring to was George Wendt, who played Norm.” Wendt was famously a Notre Dame fan and attended the University briefly.

“I grew up watching Cheers and loving it,” O’Brien said. “I can’t believe how far I’ve come and that I’m a part of this world now.”