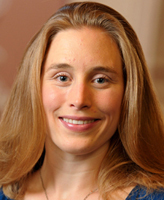 As a doctoral candidate in philosophy at the University of Notre Dame, Anne Peterson focuses her research on ancient philosophy and metaphysics, especially on metaphysical issues in Aristotle.

Her interest in these topics, she says, began as an undergraduate in Notre Dame’s College of Arts and Letters, where she majored in English and philosophy.

“I became motivated to further the study of Aristotle’s philosophy through teaching and research because his ideas systematically counteract the reductivism and relativism that have become so prevalent today,” Peterson explains.

She is particularly interested in questions regarding the fundamental status of organisms within Aristotle’s philosophy.

“Aristotle held that although organisms are composed of lower-level material, their development, characteristics, functions, and behaviors cannot all be accounted for by appealing to the nature of this material,” Peterson says. “Organisms are endowed with an irreducible nature of their own. Although today we have an idea that is different from Aristotle’s idea of the material that composes organisms, we face the same questions about reductivism that worried him.

Anne says that she has been grateful not only for the expertise available in Notre Dame’s philosophy department in her own areas of specialization, but also for the widespread interests found in the department and the College as a whole.

“I have been able to develop and pursue an interest in the philosophy of biology by working on papers concerning the classification of traits as homologous, questions fundamental to evolutionary theory,” she says. “Through serving as the graduate assistant for Faith and Philosophy for two years, I have had the opportunity to advance my understanding in the philosophy of religion.”

Peterson has also participated in an ancient Greek reading group run by the Notre Dame Ancient Philosophy Workshop for the last few years.

In addition, she has continued to pursue her interest in music through participation in the Notre Dame Chorale as well as in the Schola Musicorum, a group which performs Gregorian chant.

“The resources available at Notre Dame have allowed me to give presentations on metaphysical issues in Aristotle at two international conferences, where I connected with many enlightening scholars,” Peterson says. “And most importantly, Notre Dame has given me the opportunity to develop my teaching skills by serving as a teaching assistant for three different courses as well as by substitute teaching periodically for other courses.

“I am especially grateful for the wisdom and support of my advisor, Michael Loux, the George N. Shuster Professor of Philosophy, who sparked my interest in Aristotle, and also for the inviting, supportive, and vibrant nature of the philosophy department as a whole, both among the graduate students and among the faculty.”