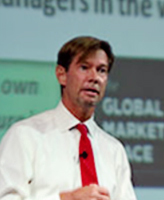 International investment advisor Terrence Keeley, who received a philosophy degree from Notre Dame in 1981, is a founding director of a new movement to promote higher ethical standards in the world of finance.

He spoke about the Financial Hippocratic Oath as part of the 2010-2011 Notre Dame Forum, a campus-wide discussion on the role of ethics, values, and morals in the rebuilding and reshaping of the global economy.

At the October 6 panel “The Professions and the Common Good,” Keeley highlighted a quote from the 2009 papal encyclical Caritas in Veritate (Charity in Truth), a key focus of this year’s forum.

“Without internal forms of solidarity and mutual trust, the market cannot completely fulfill its proper economic function,” Pope Benedict XVI writes in the document. “Today, it is this trust which has ceased to exist. The loss of trust is a grave loss.”

This particular passage made a strong impact on Keeley. “There’s absolutely no way for us to proceed as a society—to have a useful conversation or promote the common good—without us trusting the system,” he says. “This is what led to my interest, along with a number of central bankers, to push the idea of a new code of ethics.”

The Financial Hippocratic Oath is an entirely voluntarily commitment taken by a growing number of financial professionals, Keely says, and it could become the new gold standard.

“The essence of the Financial Hippocratic Oath is simple,” he says. “It’s the golden rule. Do not do to others what you would not want done to you. Full stop.”

The organization is still in its infancy, and Keeley has issued a challenge grant to a group of students in the Mendoza College of Business to develop the best business plan for making the oath a reality.

Keeley was one of the University’s first “young trustees” and now serves on the advisory board of the Nanovic Institute for European Studies, where he founded the annual Terrence R. Keeley Vatican Lecture that provides students and faculty the opportunity to explore questions involving Notre Dame’s Catholic mission with distinguished representatives from the Holy See.

On Wall Street since 1985, Keeley is senior managing principal of Sovereign Trends, a financial advisory firm he founded in July 2010. He spent the previous 22 years working in investment banking at UBS, where he oversaw sovereign client relations as a senior managing director.

Keeley recently won a Catholic Press Association (CPA) award for a piece in the summer 2009 issue of Notre Dame Magazine called “Eye of the Needle,” his personal assessment of the ethics of the Wall Street financial crisis. In announcing the award, the CPA called Keeley’s piece “a timely essay with a strong voice that manages to be both intensely personal and profoundly universal at the same time.”