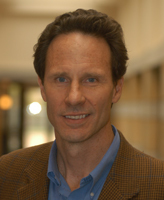 Steve Reifenberg graduated from Notre Dame in 1981. Nearly 30 years later, he’s back as the new executive director of the Kellogg Institute for International Studies, where he oversees strategic planning and international and public policy initiatives and teaches international development and Latin American studies.

What’s exciting about the Kellogg Institute, he says, “is that it’s an institution with a really serious academic profile, where the best people are studying issues related to democracy. It’s also a place that aspires to make a real difference in the world.”

The path that led him around the world and back to Notre Dame is not one he could have predicted when he left South Bend, philosophy degree in hand.

After graduation Reifenberg headed west and taught high school in Colorado for a year. In 1982—a pivotal year in his life—he planned to enroll in law school at Indiana University, a decision his parents applauded.

But his plans were dramatically altered when he ran into an old friend who had worked in Chile with the Holy Cross Associates—a volunteer program “like an ND-run Peace Corps,” Reifenberg says.

Interestingly, Reifenberg had applied to the same program as a senior and had been rejected, on the grounds that he’d never traveled further south than Florida.

But fascinated by the notion of living and working in Chile, Reifenberg abandoned the idea of law school and traveled to Santiago, where he would spend the next two years teaching in a small orphanage. In 2008, he wrote a book about his experience, Santiago’s Children: What I Learned About Life at an Orphanage in Chile.

The early 1980s in Chile was a time of repressive military rule—and widespread disregard for civil and human rights—under General Augusto Pinochet. Reifenberg was present for the first stirring of public opposition by the unions and the mothers of the disappeared.

“It was a remarkable opportunity to live and work at the orphanage at a critical moment in Chile’s history,” he says. “It had a transformative effect on the rest of my life. It gave me an interest in international issues and in vulnerable children in poverty.” 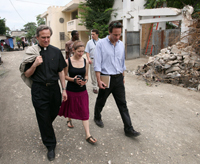 Reifenberg later received a master’s in public policy from Harvard’s Kennedy School of Government, then worked for Harvard for 20 years, most recently with the David Rockefeller Center for Latin American Studies. He was the center’s executive director before he moved to Chile to develop Harvard’s first-ever regional office outside the Boston area.

Now he’s back in Indiana, along with his wife, Chris Cervenak, a lawyer specializing in international issues and human rights, and their three children, ages 15, 13, and 10, who are making the transition from Holy Cross-run schools in Santiago to English-speaking classrooms in South Bend.

The Kellogg Institute, Reifenberg notes, is in the midst of a strategic planning process, exploring ways to build bridges from the social sciences—anthropology and sociology, for example—to other units of the University such as law, business, engineering, and science. The most pressing problems and challenges in human development are multi-disciplinary, he notes.

His advice for today’s Notre Dame students is to take fullest advantage of the opportunity to study languages, and to experience the world by studying abroad.

Students often imagine that there’s one “right path,” he says. “Life isn’t like that. It’s about taking advantage of opportunities. What are you passionate about? Where can you make a contribution? Learning goes on when they try things that don’t work out.”