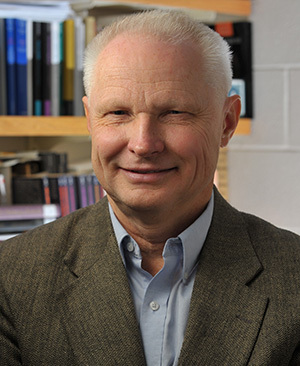 Though he died more than 200 years ago, Immanuel Kant is still shaping the study of philosophy.

“It’s hard to find a spare moment in my day because, odds are, there’s some really exciting Kant connection going on somewhere,” he said.

Ameriks, who has written and lectured extensively on the 18th-century German philosopher, was honored by the American Philosophy Association as the 2014–15 lecturer for its Walter de Gruyter Stiftung Kant Lecture Series.

The distinction, granted to one scholar per year, recognizes an individual whose work includes “a broad approach to Kantian philosophy across the philosophical disciplines.”

“I have written on a wide variety of aspects of philosophy and, also, of how Kant relates to other philosophers,” said Ameriks, a fellow of the American Academy of Arts and Sciences. “But I don’t just advocate or defend Kant. I deal with how Kant’s philosophy impacts different parts of philosophy.”

Over the course of his 42-year career studying Kant at Notre Dame, Ameriks has witnessed his area of focus—the metaphysical dimension of Kant’s work—become increasingly popular.

A significant volume of newly published notes and writings from Kant have been released in the last 50 years, and that material has helped fuel a resurgence of diverse interest in Kantian scholarship.

In addition to his scholarship on Kant, Ameriks is an expert on the history of modern philosophy, continental philosophy, and contemporary German philosophy. He continues to write essays and edit new volumes, including a second edition of his textbook, The Cambridge Companion to German Idealism.

Notre Dame, Ameriks said, has been an ideal home for his academic interests.

“For decades, Notre Dame has been connected to the history of philosophy—it’s one of the things we’re known for,” Ameriks said, adding that he hopes his recent recognition will “encourage the Department of Philosophy and its students to continue to grow.”