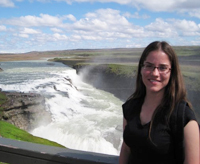 Melissa Mayus never planned on specializing in Old English. The current English Ph.D. student took an Old English class as an undergraduate at Notre Dame that sparked an unexpected passion that has taken her all the way to Iceland.

“It ended up being a very challenging but also fascinating class,” she says. “I loved learning about how historical events and literature can change languages, and I loved finding a word that seemed completely unfamiliar and then being able to trace its history until it suddenly became a word in modern English that I used every day.”

Mayus graduated from the College of Arts and Letters with majors in both English and music history, and then went on to receive an M.A. in English from Saint Louis University. But she still wanted to know more about Old English, so she came back to Notre Dame to enroll in the Department of English’s doctorate program.

Now pursing her Ph.D., Mayus has received a Leifur Eiriksson Foundation Fellowship to spend the 2012-13 academic year at Háskóli Íslands, the University of Iceland, completing an additional master’s degree, this one in medieval Icelandic studies.

“I wanted to do the M.A. program to broaden my knowledge of Old Norse, since it’s very connected to Old English—and hopefully to gain the ability to teach Old Norse literature as well as Old English,” Mayus says.

Mayus says she was first exposed to Old Norse while at Saint Louis University and began learning it in order to read manuscripts in their original forms.

“I knew Old English and Old Norse were linguistically and historically intertwined in interesting ways,” she says. “With both languages, a definite bonus is simply being able to read the literature untranslated—all writing loses something in the translation, and sometimes even good translations inadvertently leave a lot out.”

While in Iceland, Mayus is also working on her dissertation for Notre Dame, which examines conceptions of free will in Old English literature, primarily in poetry, with comparisons to Old Norse literature.

Mayus says she chose to pursue a Ph.D. at Notre Dame because of its renowned faculty and resources in medieval studies, particularly the many medieval holdings in the Medieval Institute and Hesburgh Libraries.

And it was at Notre Dame that Mayus first discovered her passion for Old English, so it was only fitting that she return, she adds.

“My first Old English class was actually as an undergraduate,” she says, “so I might say that I never would have started in this field if Notre Dame didn’t have a strong selection of medieval classes.”