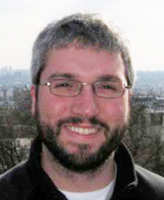 Christopher Porter, who recently completed the joint Ph.D. in logic and foundations of mathematics at the University of Notre Dame, has been awarded a prestigious National Science Foundation International Research Fellowship.

The fellowship will allow Porter to spend the next two years in France working with Laurent Bienvenue, a professor at the Université Paris Diderot with whom he has previously collaborated on several problems in the field of algorithmic randomness, a discipline lying at the intersection of computability theory, probability, and information theory.

For his next project, called “Randomness Preservation in Effective Randomness,” Porter will use tools of mathematical logic, specifically computability theory, to investigate various definitions of randomness of infinite sequences of 0s and 1s. A random sequence, such as one obtained by flipping a coin, should lack regularity, he says.

“We consider patterns that can be detected by a computer in principle—without taking into account how much time or memory the computer might need. If such an ideal device cannot detect a pattern in a sequence, then the result is something that is random relative to computational processes in general.”

While excited about his future, Porter says he has conflicting emotions about leaving Notre Dame. “The logic community—in both the mathematics and philosophy departments—has been so supportive and influential in my own formation as a logician. It’s bittersweet to leave, but I’m excited to immerse myself in everything that Paris has to offer.”

“The program encourages students to approach problems both as mathematicians and as philosophers,” he says.

“To receive training in both disciplines—and to be asked to essentially write a dissertation in each subject—has been both a serious challenge and a tremendous blessing.”

“This program strikes a chord with a small group of highly able and highly motivated students around the world,” says Michael Detlefsen, McMahon-Hank Professor of Philosophy, adding that the other two graduates of the joint Ph.D. program have also fared well.

Sean Walsh, who completed his Ph.D. in January 2011, received the prestigious Kurt Gödel Research Prize Fellowship, an award given to only five pre and post-doctoral candidates per year. This fall, he began a tenure track position in the Logic and Philosophy of Science Department at the University of California, Irvine.

Andrew Arana went on to conduct research in France and work as an assistant professor at Stanford University and Kansas State University after completing his Ph.D. in 2004. He recently accepted a tenured position as associate professor of philosophy and mathematics at the University of Illinois at Urbana-Champaign.

“There are people who have both philosophical and mathematical interests and who have high ability in both,” Detlefsen says. “Our program offers an unusual opportunity for such people to develop and pursue these interests both separately and in combination with each other.

“Not many will have the interests, ability, energy, and determination to complete it but for those who do, the evidence suggests, there will be attractive opportunities to continue their scholarly careers.”