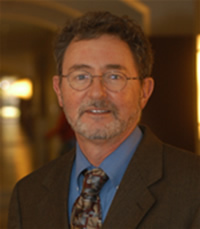 “Kannon assumes thirty-three forms to mingle in our uncertain world. By our passions does she lead us, and with compassion teach us, using love as a bridge to enlightenment that we may cross and be saved.”

With these words, Chikamatsu Monzaemon, an early modern Japanese playwright, concludes the prelude to The Love Suicides at Sonezaki, the first of his “"contemporary-life plays" for the puppet theatre.

The play tells the tragic tale of Tokubei, who disgraces his family by refusing an arranged marriage. In the final tragic scene, he and his love, Ohatsu, who is a prostitute, escape into the woods and commit suicide.

“The description of their journey to the woods, sung by a chanter in the puppet theatre, begins with one of the most beautiful passages in the Japanese language,” says Michael Brownstein, associate professor of Japanese and a 2007 National Endowment for the Humanities (NEH) fellowship recipient. “This play has become one of the most popular plays in the Kabuki repertoire as well as the Bunraku (puppet) theatre in Japan.”

His NEH-funded research will give a modern twist to antiquated critical analysis of Chikamatsu, one of Japan’s most famous playwrights.

“Much of what has been written about Chikamatsu Monzaemon’s plays in English and Japanese is rather old-fashioned from the standpoint of critical theory, so I hope to deepen our understanding of these plays by incorporating a variety of more recent critical approaches.”

Brownstein, who is also the acting director of the Center for Asian Studies, chose to study Chikamatsu because of his use of poetic beauty and melodrama, qualities that attracted Japanese audiences of the 18th century and continue to fascinate today.

“My project is the first book-length study devoted solely to the ‘contemporary-life’ plays and will include translations of four more previously untranslated plays,” Brownstein says. “One of my main interests in these plays is the way in which the tension between feudal and early modern ways of thinking in 18th-century Japan shapes the plays’ form as well as their content.”

The NEH fellowship will assist Brownstein in his further research on Chikamatsu’s work, but he has long received support from the Notre Dame community.

“Over the years, the College of Arts and Letters, and ISLA [the Institute for Scholarship in the Liberal Arts] in particular, have been very helpful in encouraging me in my research. Thanks to their support in previous years, I have been able to spend time in Japan attending plays and doing archival research.”

Institute for Scholarship in the Liberal Arts

This piece was contributed by Jane Marie Russell (’08), an intern in the College of Arts and Letters Office of Web Communications and Support.