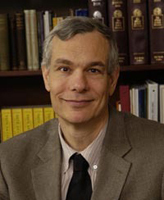 Theologian John C. Cavadini, McGrath-Cavadini Director of the University of Notre Dame’s Institute for Church Life (ICL), was recently in Washington speaking to a symposium of young Catholic theologians about how to teach the faith.

The meeting, Intellectual Tasks of the New Evangelization, was sponsored by the United States Conference of Catholic Bishops (USCCB), and intended to deepen and strengthen their relationship with a new generation of America’s Catholic teachers, and most of the 54 as-yet untenured theologians in attendance had received their doctoral degrees within the last five years.

Washington Cardinal Donald Wuerl, chairman of USCCB Committee on Doctrine, had earlier suggested to these scholars that their role as teachers included a twofold responsibility, both to “cradle Catholics” forgetful of or unfamiliar with the essentials of the faith, and to all disaffected people in contemporary society, for whom “the Gospel has lost its taste, its freshness, its luster.”

Cavadini’s scholarship and teaching principally concern patristics, or the theology of the earliest church, so it was natural that this 21st century challenge put the Notre Dame theologian in mind of a 3rd century colleague, Origen of Alexandria, and the first “intellectual task” he recommends to these more recently arriving colleagues is that they re-read and study the works of Origen and other ancients “specifically with a mind towards discerning their apologetic strategy as a useful resource for today.”

Origen’s own strategy, as Cavadini points out, came close to “abandoning the whole apologetic enterprise.” Called upon to answer rhetorical attacks on the earliest Christian church, the 3rd century theologian seemed almost to refuse, reminding his readers that “our Savior and Lord Jesus Christ was silent when false witnesses spoke against him, and answered nothing when he was accused; he was convinced that all his life and actions … were better than any speech in refutation of the false witness and superior to any words that he might say in reply to the accusations.” 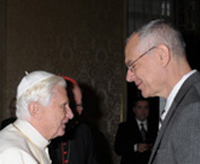 Acknowledging and even extolling them for their eloquence and power, Cavadini insists that Origen’s arguments “function in exactly the same way, ultimately, as the refusal to argue did, namely, to paint an icon of the silent Christ, to point the reader’s attention not to the success of the arguments, but to draw ever more convincingly the icon of the Lord, to ‘write’ the icon.”

As Cavadini describes it, the task of evangelization today hasn’t changed much over the centuries since Origen was arguing with skeptical Greek intellectuals, and today, as then, a theologian needs to argue in a way which “while using reason, does not reduce Christian faith to a religion that can be accepted purely on the grounds of argumentation or plausibility, or even on the grounds of the clearing away of specific objections. The clearing away of objections to Christian faith, the rebuttal of critiques, must itself be the brushstrokes, as it were, of a positive project of icon painting that transcends argumentation and presents the mystery of the Lord’s person, with its own intrinsic power of demonstration and appeal, its own nobility, to the reader’s (or the student’s) mind and heart.”

Cavadini reminds his younger colleagues that Origen’s evangelical strategy is amplified in more recent Catholic teaching, particularly in Pope Benedict’s encyclical letter, Deus Caritas Est (God is Love), which similarly insists that “the most persuasive apology for the Christian faith is the witness of Christians.”

“A Christian knows when it is time to speak of God and when it is better to say nothing and to let love alone speak,” Pope Benedict writes. “He knows that God is love and that God’s presence is felt at the very time when the only thing we do is to love. He knows…that disdain for love is disdain for God and human beings alike, it is an attempt to do without God.”

Cavadini thinks a slogan for the New Evangelization might be found in that imperative as old and new as the faith itself, and he recommends it to the fledgling teachers: “Let love alone speak.”

Upon returning to Notre Dame after the Washington conference, it occurred to Cavadini, whose responsibilities as ICL director include administration of several programs which directly serve the Catholic Church, that he could also recommend the slogan to the institute he oversees, and which is now developing a plan for its future operations.

“For the next five years the work of the ICL will surround the twin themes of evangelization and healing,” Cavadini says. “Evangelization is intrinsically healing because, rather than draw attention to its own efforts, it uses those efforts, as it were, to allow an icon of the Lord to be painted on one’s heart, an icon of divine love which is itself healing. The other way around, efforts at healing the effects of scandal in the Church, for example, are inherently evangelizing, helping to remove accumulated grime from the face of an ancient icon, and allowing its own intrinsic and healing splendor to shine forth again. So I guess at ICL we are, in various ways, in the business of icon painting and restoration.”

That icon should be something to see.