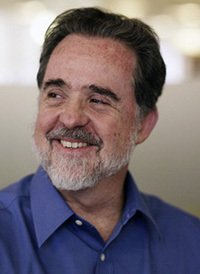 Raymond Offenheiser Jr. travels through disaster zones about as routinely as most of us drive to work. From Africa to Afghanistan, New Orleans to most recently Haiti, Offenheiser has walked through cities and villages devastated by wars, famine and natural disasters. He has seen human suffering on a grand scale, and the heartening—and heartbreaking—efforts as people struggle to put the pieces of a life back together again.

Offenheiser is the president of Oxfam America, the international relief and development agency that helps communities rebuild after a disaster. He will be speaking at the University of Notre Dame on Tuesday, March 30, at 6:30 p.m. in the Geddes Hall Andrews Auditorium. His talk is part of the eighth annual “Making a Living Making a Difference” program, which aims to inform students and others from the community about employment opportunities in the public and nonprofit sectors.

Offenheiser has worked his entire career in the nonprofit sector and is a recognized leader on issues such as poverty alleviation, human rights, foreign assistance, and international development.

“However, not only can he speak from his career experiences about making a difference in our world, but also from his own transforming life experiences,” says Denise Wright, program coordinator for the Kellogg Institute for International Studies at Notre Dame.

Offenheiser’s talk will be followed by a fireside chat at 7:30 p.m. in the Geddes Hall McNeill Library. There also will be an information fair at the same time in the Geddes Hall Coffee House with several nonprofit organizations on hand to talk with students about internship and job opportunities. In attendance will be AmeriCorps, the American Red Cross, Catholic Relief Services, the Casa Maria Catholic Worker House, Feed the Children, the Environmental Protection Agency District 5 Office of Regional Counsel, Hospice/Uganda, and Inspire, an on-campus not-for-profit club.

The events are free and open to the public.

A 1971 Notre Dame graduate, Offenheiser has led the U.S. affiliate of Oxfam International since 1995. During his tenure, the organization has grown more than fourfold and has positioned itself as a leader on international development and global trade. He recently visited Haiti, one month after the devastating 7.0 earthquake that killed an estimated 230,000 people and left more than a million homeless.

A number of reports have found that the nonprofit sector has continued to grow and thrive in recent years, despite setbacks in the rest of the economy.

Notre Dame sponsors for the event include the Career Center; Kellogg Institute for International Studies; the Center for Social Concerns; the Notre Dame Law School; the Department of Political Science and the Higgins Labor Studies Program, both of the College of Arts and Letters; and the Master of Nonprofit Administration Program at the Mendoza College of Business.

Offenheiser is a member of the Council on Foreign Relations, the Global Interdependence Initiative at the Aspen Institute, and the Inter-Action Board of Directors. He is a member of the advisory board for Notre Dame’s Kellogg Institute and has served as an advisor for Harvard University’s Asia Center, the School for International and Public Affairs at Columbia University, the Carnegie Endowment for International Peace, Inter-American Dialogue, and the John F. Kennedy School of Government at Harvard University. He was a board member of the ONE Campaign.