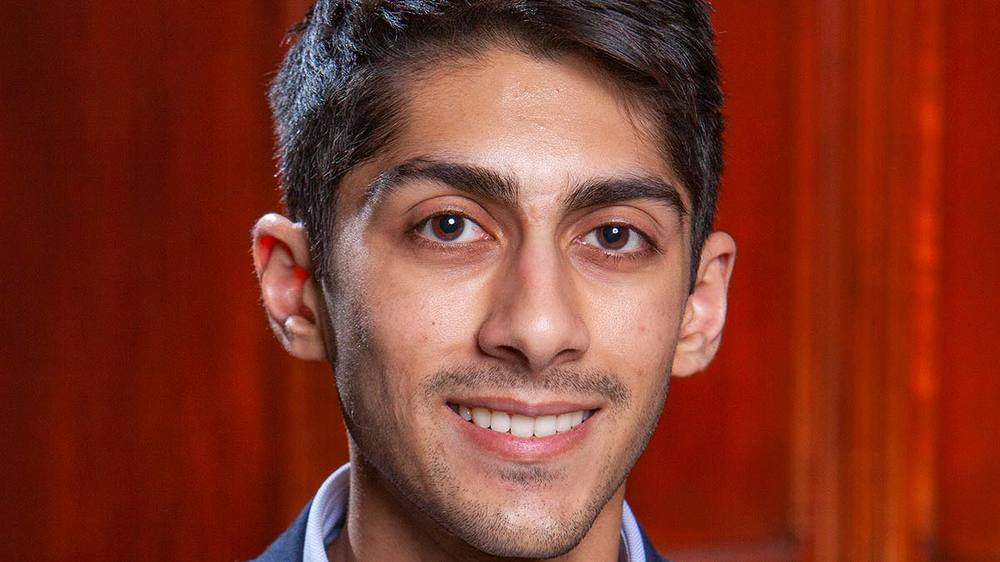 University of Notre Dame senior Prathm Juneja has been named to the United States Rhodes Scholar Class of 2020. Juneja, of Edison, New Jersey, is one of 32 Rhodes Scholars selected from a pool of 963 candidates. He is Notre Dame’s 20th Rhodes Scholar and the 14th from the College of Arts and Letters — including four in the past six years — and will commence his studies in Oxford in October.

“Notre Dame could not be prouder of Prathm Juneja because he was selected not for his scholarly achievement alone, but — in the words of the Rhodes Trust — ‘for their character, commitment to others and to the common good, and for their potential for leadership in whatever domains their careers may lead,’” said Notre Dame President Rev. John I. Jenkins, C.S.C. “Congratulations to Prathm and to the Notre Dame faculty and staff of the Flatley Center for Undergraduate Scholarly Engagement who helped him to reach this point in his academic journey.”

Jeffrey Thibert, the Paul and Maureen Stefanick Director of the Flatley Center for Undergraduate Scholarly Engagement (CUSE), said, “We are so happy to congratulate Prathm Juneja on his selection as a 2020 Rhodes Scholar. Since 2016, only six U.S. institutions have produced more Rhodes Scholars than Notre Dame. This is a testament to the excellence of the undergraduate educational experience at Notre Dame and the fundamental alignment of the University’s mission with the Rhodes ideal of ‘standing up for the world.’”

Thibert continued, “Prathm is truly an exceptional individual who has fully seized the opportunities that Notre Dame has provided. It has been gratifying to work with such an authentically good person, and it is heartening to see him be recognized with such a prestigious opportunity to improve this world.”

CUSE, which promotes the intellectual development of Notre Dame undergraduates through scholarly engagement, research, creative endeavors and the pursuit of fellowships, assisted Juneja and Notre Dame’s other Rhodes finalists — seniors Matthew Schoenbauer and Nicholas Ottone — with the application process for the Rhodes Scholarship.

Juneja is a political science and computer science major in the Reilly Five-Year Dual Degree Program in Arts and Letters/Engineering. He is a Newman Civic Fellow, a College of Arts and Letters Dean’s Fellow, a Hipp-Beeler Scholar and a Glynn Family Honors student.

On campus, he is involved with NDVotes and the Building Bridges Mentoring Program. He is a former chief of staff and director of national engagement and outreach for Notre Dame Student Government.

Off campus, he is an innovation associate with Pete Buttigieg for America, and he is active in the St. Joseph County Democratic Party.

He previously served as a researcher and software developer in the South Bend Mayor’s Office, where he developed an autonomous 311 chatbot to help answer questions about city government, and as a civic technology fellow with MicrosoftNY, a civic organization dedicated to improving lives in New York via civic design, technology and data.

His senior thesis examines the Interstate Voter Registration Crosscheck Program and its effect on voter turnout.

With a background in civic technology, he plans to pursue a master of science in social data science and a master of public policy at Oxford.

From there, he hopes to work on innovation and technology in government, where he can tackle the most important cybersecurity, privacy and implementation issues of our time.

“I am so grateful for the support of Dr. Jeff Thibert, Elise Rudt and everyone at CUSE who guided me throughout this entire process with kindness and support,” Juneja said. “I’d also like to thank my recommendation letter writers, Professor Bradley Malkovsky, Professor Shreya Kumar, Professor David Campbell, Professor Paul Ocobock, Brian Coughlin, Rosie McDowell, Santi Garces and Mayor Pete Buttigieg. Without their support over these past four years, I know I would not have this opportunity.”

He added, “I am privileged to have been selected for the Rhodes Scholarship, and I hope to use my education at Oxford for service towards a more equitable society.”

Kumar, assistant teaching professor of computer science and engineering at Notre Dame, said, “I have worked with many students who build impressive solutions to common problems, but I have hardly met anyone more dedicated than Prathm to fairness, accessibility and transparency in democracy. He will do great things for this world.”

Named for English businessman and politician Cecil Rhodes, the Rhodes Scholarships are the oldest international fellowships in the world, recognizing American students from all 50 states, the District of Columbia and the U.S. territories for their scholarly achievements, character, commitment to others and to the common good and potential for leadership.

For an extended interview with Juneja, listen to the With a Side of Knowledge podcast produced by the Office of the Provost.