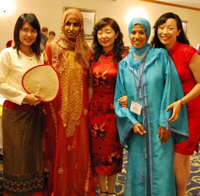 For the past five years, recent college graduates from around the world have traveled to Notre Dame as part of the Fulbright Foreign Language Teaching Assistant (FLTA) Program. In mid August, the latest cohort will arrive—65 students from more than 25 countries around the world, who will convene on campus to prepare to live and teach their native languages to students across the United States.

The Fulbright scholars will be arriving from Afghanistan, Argentina, Japan, Kenya, and Oman, among other countries, and will be teaching languages as diverse as Finnish, German, Persian, Tagalog, and Uzbek. Host teaching sites include schools such Grinnell College; University of California, Berkeley; Wake Forest University; Yale University; and the University of Notre Dame, where three Fulbright scholars will be staying to teach Irish, Korean, and Arabic.

Sponsored by the U.S. Department of State and the Bureau of Educational and Cultural Affairs, the Fulbright program is administered by the nonprofit Institute for International Education as part of its mission to “increase the capacity of people to think and work on a global and intercultural basis.”

The same goal explains the ongoing involvement of Notre Dame in the Fulbright orientation, notes Brian Ó Conchubhair, orientation director. As one of the first sites for the welcome program, Notre Dame has developed a robust, five-day educational experience that includes everything from foreign language pedagogy and U.S. academic standards to designing a syllabus and learning what U.S. students expect from their teachers. Orientation leaders include representatives from Notre Dame’s Center for the Study of Languages and Cultures, Kaneb Center for Teaching and Learning, Office of Institutional Equity, and Office of the Provost.

Because many students in the program have never been to the United States, the orientation covers U.S. culture and social customs—including an introductory class about American football. Informational workshops also give FLTA participants tips on how to open a bank account, how to find an apartment, and what to expect from police officers and other authority figures.

“For some,” Ó Conchubhair says, “the orientation is the first time they have addressed issues such as sexual harassment or discrimination in the work place, so it makes for lively debates and exchanges of ideas.”

Adding to the complexity of this year’s program is the fact that orientation falls in the holy month of Ramadan during which Muslims must fast, but Ó Conchubhair notes that they use occasions such as this as opportunities for greater cultural awareness and exchange.

These challenges are well worth the effort, Ó Conchubhair says, because it allows Notre Dame to assist Fulbright scholars in bringing their languages and cultures to students across the United States—including at Notre Dame. “The Fulbright program gives students access to young, native speakers who are up-to-date with youth culture and can inspire students, not only academically, but culturally,” he says.

The FLTA program also spreads the University’s reputation in the home countries of the Fulbright scholars. “Notre Dame is their introduction to this country. Those initial days when they first wake up in United States are indelibly linked with seeing the dome, the grotto, and the campus as a whole,” he says. “So when these young scholars return home to pursue careers and take leadership roles in education, academia, and politics, they will take with them their memories and impressions of ND.

“That is a payoff in the long term—the creation of a positive image of Notre Dame as a leading international university among the next generation of leaders across the globe.”

This year, four other universities across the United States will also be hosting FLTA orientations: Columbia University, Michigan State University, Stanford University, and Syracuse University. In addition to funding the FLTA program, Fulbright also runs programs that send U.S. students around the world for a variety of activities, such as fellowships, research projects in the liberal arts and sciences, and international instruction of the English language.