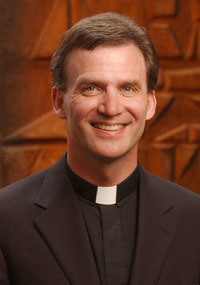 While human migration is as old as human history, there are more migrants today than ever before.

Displaced from their homelands by wars, genocide, famine, natural catastrophes, and collapsed or withering economies, there are 200 million such people worldwide, roughly the equivalent of the population of Brazil, according to Rev. Daniel G. Groody, C.S.C., assistant professor of theology and director of the Center for Latino Spirituality and Culture in the University of Notre Dame’s Institute for Latino Studies.

Father Groody is one of seven academic experts selected to participate in the Vatican’s sixth World Congress on the Pastoral Care of Migrants and Refugees, which will be held Nov. 9 to 12 in Rome. The theme of the meeting, convened by the Pontifical Council for the Pastoral Care of Migrants and Itinerant People, is “a pastoral response to the migratory phenomenon in the era of globalization,” and Father Groody will help write its concluding document, or “instruction.”

A glance at Father Groody’s resume makes it easy to understand the Vatican’s invitation. In addition to having spent many years doing pastoral work and research in Latin America, particularly along the U.S.-Mexican border, he teaches, writes and lectures on U.S. Latino spirituality, globalization and the relationship of Christian spirituality to social justice. In addition to the numerous articles and books he has written on the plight and predicament of migrant people, he is the producer of award-winning documentary films on them as well, including One Border, One Body: Immigration and the Eucharist and Dying to Live: A Migrant’s Journey. In recent years he has visited, accompanied and spoken with migrants in, among other countries, Slovakia, Ukraine, Libya, Malta, Morocco and Spain.

Father Groody, who spent the 2007-08 academic year as a visiting research fellow at Oxford University’s Refugee Centre, seems keenly aware of the complexity and urgency of the global phenomenon of migration and quick to acknowledge that broadly interdisciplinary research is indispensable to understanding and coping with it. In an article in the fall issue of the journal Theological Studies, he listed economics, politics, geography, demography, sociology, psychology, law, history, anthropology and environmental studies as among the disciplines which are crucial to the relatively new field of migration studies.

“Theology, however, is almost never mentioned in major works or at centers of migration studies,” Father Groody admonished. “Some research has been done on migration and religion from a sociological perspective, but there is virtually nothing on the topic from a theological perspective. Theology seems to enter the academic territory from the outside, as if it were a disciplinary ’refugee’ with no official recognition in the overall discourse about migration.”

As a theologian, Father Groody seems intent upon crossing that disciplinary border, pioneering what he calls “the foundation of a theology of migration and refugees,” the subject of a book on which he is now at work.

At the core of this theology is the notion of the Imago Dei, (the “Image of God”), God’s creation of human beings in his “image and likeness” as recounted in the first verses of Scripture (Gen.1:26-27).

“No text is more foundational or more significant in its implication for the immigration debate,” Father Groody says. “It reveals that immigration is not just about a political ’problem’ but about real people. The Imago Dei is the core symbol of human dignity, the infinite worth of every human being, and the divine attributes that are part of every human life, including will, memory, emotions, understanding, and the capacity to love and enter into relationship with others. Listening to stories of immigrants along the U.S.-Mexico border, as well as the borders between Slovakia-Ukraine, Malta-Libya, and others, I have discovered that a common denominator around the world among all who migrate is their experience of dehumanization.”

An appropriate response to this dehumanization, not only for Christians, but for all people, will be the predominant concern of all in attendance at the sixth World Congress on the Pastoral Care of Migrants and Refugees, and Father Groody will play a vital role in helping them articulate it.

Originally published at newsinfo.nd.edu on November 06, 2009.