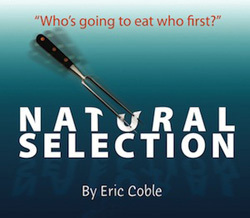 The University of Notre Dame’s Department of Film, Television, and Theatre will present Natural Selection by Eric Coble as part of its 2009–10 theater season.

Directed by Tim Hardy, this ironic comedy depicts a future where technology rules supreme: everything is cooked in a microwave, blogging has replaced conversation, school has become virtual and the Coca-Cola flavor of the week is vanilla-cherry-lime.

In Natural Selection, Henry Carson, a curator at Cultural Fiesta Theme Park is forced to travel the country in order to restock the Native American Pavilion. He soon finds that “native” can no longer be strictly defined. Technology has a decided disadvantage against mythology and, after years spent making the world artificial, the world begins to fight.

Tickets are $15 for general admission, $12 for faculty, staff and seniors, and $10 for all students. Tickets are available by calling the ticket office at 574-631-2800, or on the Web at http://performingarts.nd.edu.

Originally published at newsinfo.nd.edu on February 08, 2010.