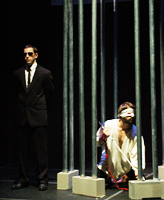 Electronic music roars and pulsates throughout the theatre. On stage, a blind man paces, struggling to escape the ring of steel bars that confine him. Meanwhile, a stern figure in a sleek suit and sunglasses stands guard. When the lights dim and dialogue begins to flash above the stage from an overhead projector, one thing is clear:

This production of John Milton’s Samson Agonistes is far from ordinary.

Students and faculty from the College of Arts and Letters staged the show through a new partnership between the University of Notre Dame Disability Studies Forum and the Crip Slam series at Chicago’s Victory Gardens Theater. The Crip Slam series explores disability culture through performances, readings, and arts events—all of which are made accessible to people with disabilities through sign language interpreters, captioning, and other methods. The partnership project was conceived and led by Essaka Joshua, a teaching professor in Notre Dame’s Department of English. 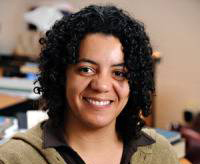 Joshua says she founded the Disability Studies Forum in 2008 to seek “a new understanding of disability as a product of social, environmental, and personal forces.” The forum’s Samson Agonistes project was supported by a grant she obtained from the College’s Institute for Scholarship in the Liberal Arts.

Joshua, who also serves as the Joseph Morahan Director of the College Seminar, incorporated the production into two of her classes: a college seminar called Disability and an English course titled Beauty, Disability, and the Novel.

“I wanted my students to go through the process of understanding how the stage affects an interpretation of a text,” she says. “Putting it on the stage gets people very much involved. They absorb it; they live it.”

Joshua and Bauer, who is blind, say they chose Milton’s rarely seen closet drama Samson Agonistes because it offered a very personal perspective on disability. By the time he composed the play, Milton had lost his vision.

“We examined Samson Agonistes as a work that … dealt with the rawness of acquiring a disability,” Joshua says. “There’s an adjustment period with acquired disability, which includes rage, anger—it’s a difficult journey for many people.”

Led by Bauer and two student directors, Carolyn Demanelis and Ryan Belock, Joshua’s classes worked with staff at the DeBartolo Performing Arts Center to coordinate every aspect of the production, from set design to casting to marketing.

“There was a lot of problem solving,” Joshua says. “I found the students working in creative and unique ways—ways that a more traditional class just doesn’t demand of them.” 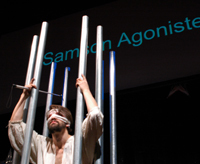 The student production team also took on the challenge of ensuring that the show was accessible to individuals with disabilities. One of the most noticeable ways was a slideshow of the original text, which played above the stage.

“For novices of 17th century poetry, having that text, in the original spelling, can help you with something that’s missed,” Joshua says. “It’s also there as a political statement: this is an accessible play. The able-bodied audience is not the most important part of our audience.”

Joshua, who is writing a research paper about the production, says it was one of only 15 times Samson Agonistes had ever been staged, and she believes it was the first by a blind director. It was rewarding, she says, to see what an impact the historic project had—both on her students and those in the audience.

As just one example, she says, an eminent Milton scholar who attended the Chicago performance told the discussion panel that he had been reading Samson Agonistes for 40 years and had never realized it was a play about disability.

“For me, that was a heart-stopping moment because if you bring to something a disability studies perspective, you bring a new understanding.”