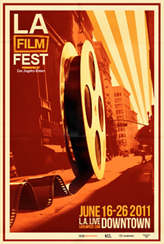 The Elect, a documentary by University of Notre Dame undergraduates Erin Zacek and Dan Moore, has been selected to screen at the prestigious Los Angeles Film Festival.

Chosen from more than 5,000 submissions, the film was one of roughly 200 features, shorts and music videos, representing more than 30 countries, that make up the main body of the festival which screens at various Los Angeles venues June 16 to 26. The 20-minute film will compete in the Short Film category.

The Elect is an unflinching look inside the daily lives of the members of the controversial Westboro Baptist Church of Topeka, Kan., whose mantra, “God Hates America,” has made them perhaps the most hated church in the country.

Zacek and Moore, both seniors, produced the film during fall 2010, as a class project in the Documentary Video Production course taught by faculty member Ted Mandell in the Department of Film, Television, and Theatre.

Now in its 17th year, the Los Angeles Film Festival, presented by the Los Angeles Times, is widely recognized as a world-class event, showcasing the best in new American and international cinema and providing the movie-loving public with access to some of the most critically acclaimed filmmakers, film industry professionals, and emerging talent from around the world.