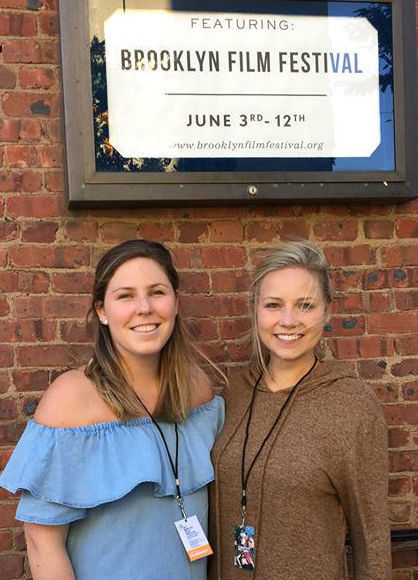 Kelly Quinn and Caroline Clark at the 2016 Brooklyn Film Festival.

As students in Ted Mandell’s documentary course in Notre Dame’s Department of Film, Television, and Theatre, they planned to make a broader film about gun violence.

“It was a very interesting, pressing topic that we’re both passionate about,” Clark said. “We saw a great story that could be told there.”

But Mandell encouraged them to pursue a different, more challenging film about skepticism surrounding the 2012 mass shooting at Sandy Hook Elementary School and how that impacts the community in Newtown, Connecticut.

The end result, Patrolling Sandy Hook, has been featured in 12 film festivals across the country and will continue appearing in festivals throughout 2017. It’s won honors including the Special Jury Award at the USA Film Festival, the Award for Achievement for a College Production from the Iowa Motion Picture Association, and the Gold Award for Best Editing at the L.A. Shorts Awards. 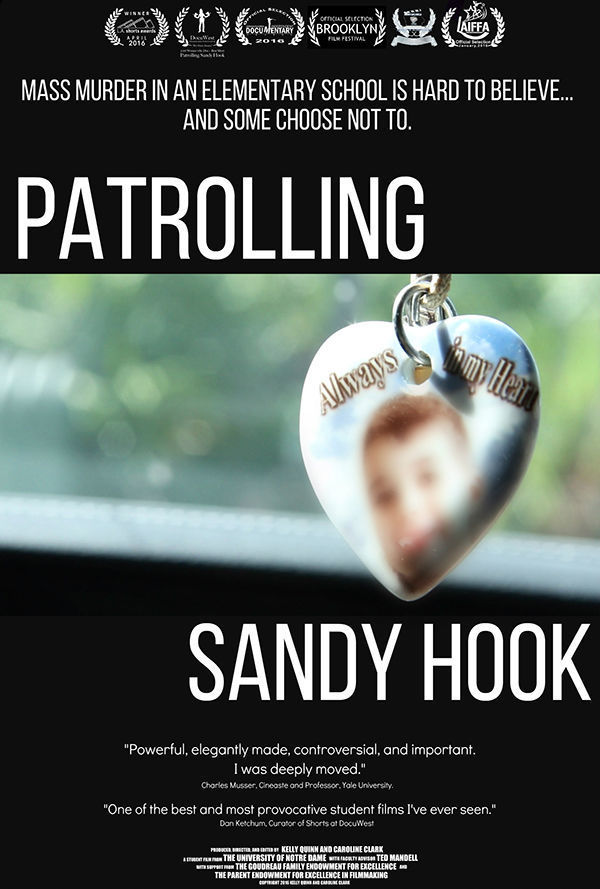 “Listening to an audience is the best way to perceive what they're thinking. When the FTT program gave us the opportunity to attend our screening at the Brooklyn Film Festival, we were excited to hear how a live audience would respond to our admittedly controversial film,” Clark said. “Hearing the audience groan, laugh, or adjust in their chairs throughout the film proved to us that this story, though uncomfortable, must be shared.”

Quinn and Clark aren’t Notre Dame’s only success story, either. The University has produced a string of notable documentarians, from How to Die in Oregon director Peter Richardson to The Great Alone’s Greg Kohs to Wordplay director Patrick Creadon.

That tradition of excellence has extended to recent student filmmakers, including 2015 graduate Dylan Parent, whose short documentary on a Holocaust survivor screened at the St. Louis International Film Festival, and Erin Zacek ’11 and Dan Moore ’11, whose film The Elect was chosen for the 2011 Los Angeles Film Festival.

The documentary course and other filmmaking opportunities, such as the “First Time Fans” series, are equipping FTT students with the skills, experience, and perspective they’ll need to forge successful careers in the film industry.

“The idea is to see if they can make a film that captures a subject of interest, but in a way that is more consistent with the tradition of documentary filmmakers that came out of the cinéma vérité movement,” Mandell said. “It’s the idea that you want to capture moments instead of contrived stories.”

In Mandell’s documentary course, students oversee nearly all phases of pre-production, filming, and editing. Mandell’s role is to encourage and occasionally push them to make unique films that explore new territory.

One of the first lessons he covers is that it’s more important to find a compelling subject than an interesting story. But he also reminds the class that even the “true” stories they see on TV contain elements of fiction.

“People think they’re watching something that’s actually happening in the world, when actually it’s a story that’s been very carefully constructed,” he said. “That’s not the way life works.”

Mandell prompts his students to find compelling people and chronicle them without judgment. A narrative will emerge from there.

That’s what happened when Quinn and Clark interviewed a major online conspiracy theorist pushing the theory that the Sandy Hook shooting never happened. The students also met with Lenny Pozner, the father of one of the Sandy Hook victims.

The result is a film that helps audiences understand that skeptics of Sandy Hook and other major tragedies exist—and that their questions take a toll on people like Pozner who are still grieving.

“It opens the eyes of our audience to what’s happening,” Quinn said. “It shows a new perspective of how a victim, or someone affected by a high-profile crime, can go through something else.”

Other students, including 2016 FTT graduate Anna Gonzalez, use their documentary project to explore a topic they were already passionate about. 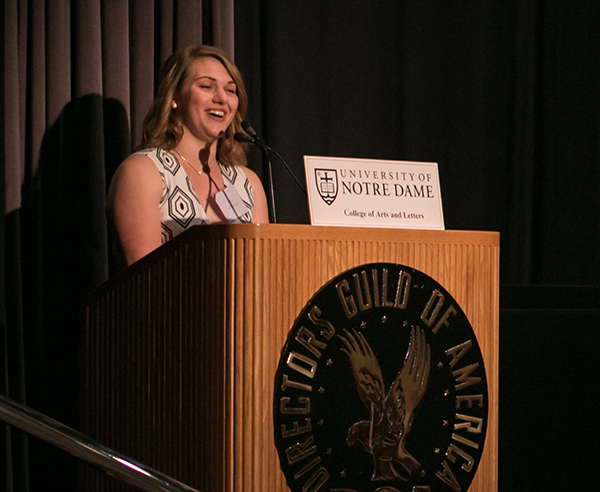 Anna Gonzalez discusses her film at the An Evening of Notre Dame Student Films event in Los Angeles.

Gonzalez loves stand-up comics and their backstories. Many of her favorites are from Boston and were raised Catholic, and that got her thinking about whether there are any aspiring stand-ups at Notre Dame.

For her film, Spark of Madness, she profiled Dayton Flannery, a New York native who originally came to Notre Dame to run track. Eventually, he started performing stand-up, and he’s had enough success on campus to consider making comedy his career.

But that also leads to an awkward question when people ask him his post-graduation plans: “You spent hundreds of thousands of dollars on your education, and now you want to go back to New York and tell jokes?”

It’s a tension she aimed to capture in her film—and one she understands well, as she faces a similar reaction when others hear she wants to be a filmmaker.

“It’s hard to tell people that if I didn’t do this, if I didn’t even try, I would never be happy,” she said.

Gonzalez, Quinn, and Clark all traveled to meet with subjects in their documentaries, receiving grant funding through the department.

“The ability to travel to New York to film an integral part of my story was fantastic,” Gonzalez said, “but being able to do it without having to worry about paying for it on top of the expense of college itself allowed me to focus on my artistic pursuit without feeling inhibited in any way.”

A few months removed from graduation, Gonzalez, Quinn, and Clark are taking their first steps toward careers in the film industry.

Clark moved to Los Angeles and is working for a documentary production company run by Creadon, director of Wordplay as well as Catholics vs. Convicts, a forthcoming entry in ESPN’s “30 for 30” film series. Quinn is also in LA, working for a talent agency. Gonzalez currently has a paid internship with Fighting Irish Media. Their films were also featured at An Evening of Notre Dame Student Films, an industry showcase and alumni networking event hosted in Los Angeles by the College of Arts and Letters.

All are thankful for the experience they gained through Mandell’s class. And they want others to know about that opportunity too.

Before she left, a first-year student and aspiring cinematographer asked Gonzalez whether he should study in the FTT program or move to a more well-known program at another university.

“I told him, ‘It’s a growing program. And it’s passionate students like you and like me who are going to help establish it.’”