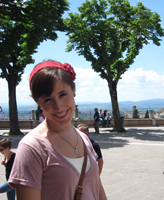 Raised in a predominantly Spanish-speaking Miami community, Notre Dame senior Carolyn Caballero says she knows that daily interactions with native speakers are the key to truly understanding a new language.

“You can’t take four years of Spanish and think you know it,” she says. “You have to experience dialect, questions coming out of left field, and thick accents.”

So in pursuing her minor in Italian, the science preprofessional studies student applied for a Summer Language Abroad (SLA) grant from the College of Arts and Letters’ Center for the Study of Languages and Cultures.

Although initially intimidated by the rapid pace of the native speakers, Caballero soon developed the ability to comprehend what they were saying and to express her own ideas in Italian.

“When I first got there, I could never get anyone to understand me,” she says. “Toward the end of my stay, I had a discussion with one of my teachers about whether altruism existed, and when I explained myself, he said ‘that made perfect sense, I get what you mean.’

“I felt really proud of myself for getting that across. I felt more in control with the language itself.”

This dramatic improvement showed in Caballero’s test scores as well.

SLA grant recipients take a series of exams to measure their language skills before, during, and after the experience. After just a few short weeks in Italy, Caballero felt much more confident in the oral examination and boosted her score by several levels.

“It’s insane how much of a difference just six weeks can make,” she says. 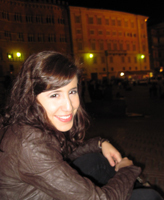 In part, this improvement can be attributed to Caballero’s experiences outside the classroom. While in Siena, she interned with a local medical service company, Misericordia.

“The patients don’t speak any English,” she says. “Working with them, I got a lot more experience with the dialect.”

Caballero says she deliberately chose to live, work, and study in the smaller Tuscan community because she wanted a more authentic cultural experience. “I knew it wouldn’t be as crowded or touristy as Rome,” she says. “Fewer people speak English so you’re forced into speaking Italian.”

As her language skills grew stronger, Caballero was able to participate in many thought-provoking discussions with her new Italian friends—talking about everything from politics and the economy to the differences between the two cultures.

“I really like learning about all cultures, it makes you a lot more open-minded,” she says. “The way you’re raised, the way your culture is, affects the way you think and act.

“Living in Siena made me realize that my American values and my Hispanic values just aren’t enough for comprehending the world.”