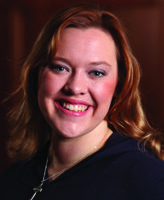 Television plays a role in the daily lives of most Americans—but its impacts can be even greater among the fan groups that spring up around popular shows.

To explore the interplay between one television director’s work and the fan culture it inspires, Notre Dame senior Stephanie DePrez recently traveled to Southern California to research and film a short documentary.

A double major in the Department of Music and the Department of Film, Television, and Theatre, DePrez focused her research on writer/director Joss Whedon, creator of Buffy the Vampire Slayer and Firefly, among others.

“Whedon’s position as a television auteur, his commitment to pushing storytelling media forward, and his aptitude for creating diehard fan bases with whom he openly communicates make him one of the most relevant subjects of television study today,” she says.

Funded by an Undergraduate Research Opportunity Program grant from the Institute for Scholarship in the Liberal Arts, DePrez focused her investigation and filming on the impact Whedon’s shows have on pop culture and whether these dedicated followers, in turn, can influence the medium itself.

“The angle that is most interesting and that I will pursue in my editing is the struggle for content and creative ownership between writers, executives, and fans,” she says. “I am interested in documenting the development of Whedon’s cultural impact and the role that his ‘cultish’ fan base has played.”

After reading and watching all the material she could find on Whedon, DePrez traveled to the annual San Diego Comic-Con International to shoot her documentary. The convention is a mecca for fans of many pop-culture genres, from graphic novels and video games to film and television. While there, she interviewed fans, attended panel discussions on Whedon, and met with professionals in the television industry, including some who had worked with him on multiple productions.

“This was the biggest ‘baptism by fire’ I could have received technically,” DePrez says. “Learning everything from how to use the camera to focusing on the most relevant information in order to tell a coherent story will be an asset to me once I graduate. And beyond the technical competence, the interviews with creative personnel gave me information and advice I will take to heart.”

DePrez also discovered what it means to lead a research project from conception to completion—and that it doesn’t always turn out as expected.

“My thesis has changed drastically since I wrote my grant proposal,” she says. “When I first sat down to log the footage, I began to panic because no one was talking about what I had planned to base my film on. Instead of discussing fan ownership of text—part of my original thesis—most of my industry insider interviews talked about fans’ inability to influence television as it is happening. Eventually, I realized my documentary had to change to work with what I was given.”

But DePrez did not let the evolution of her original idea discourage her.

“I am actually quite pleased I’ve uncovered an attitude toward fan influence that I’ve never encountered in any of my previous studies,” she says. “I’m excited to be able to present a new argument within the realm of television studies.”

DePrez says her adviser, Associate Professor Christine Becker, has been an important mentor throughout the project, even as it evolved. “Fan studies is a hot topic in the world of television right now, and Professor Becker helped me hone in on a facet of it that would be worthwhile to pursue,” she says. “As my thesis has changed, she’s been the first to point out how interesting my findings are. Television is the medium of our times, and it is important to recognize the influence it has.”