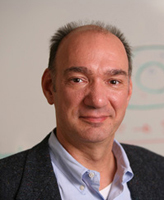 A growing collaboration between Notre Dame’s Department of Psychology and Department of Computer Science and Engineering (CSE) has given rise to a number of research projects that explore the interaction of humans with technology.

These interdisciplinary efforts “have been expanding at an impressive rate over the past few years,” says Professor Dan Lapsley, chair of the Department of Psychology, who reports that researchers from the two departments are currently teaming up to advance understanding and practices in areas as wide-ranging as stroke rehabilitation, spatial cognition, robotics, and autism treatment.

“Different areas in computer science have always had some relationship with certain areas of psychology or have taken inspiration from them,” notes Kevin Bowyer, CSE chair and the Schubmehl-Prein Professor of Computer Science and Engineering.

“But this is strongly supported at the provost level—and all in the spirit of interdisciplinary, collaborative research where departments get together to solve larger, higher-impact problems than they could individually.”

Exemplifying this growing relationship is the recent hire of Sidney D’Mello, whose research spans cognitive psychology, computer science, and education and is the first-ever joint appointment between the College of Engineering and the College of Arts and Letters.

He was recently awarded a National Science Foundation grant for more than $1 million to fund a three-year project in which his team will study boredom and engagement in complex learning environments.

D’Mello comes most recently from the University of Memphis, where he worked on a joint project with researchers at Notre Dame and Sandia National Laboratories—and was impressed, he says, with Notre Dame’s commitment to foster interdisplinary research.

“It was great to see a university take such interdisciplinary initiative,” he says. “because that’s an idea that is thrown around but not always taken seriously.”

In his research, D’Mello works on “emotion-sensitive” computers. He and a colleague have a patent pending on the first fully automated Intelligent Tutoring System that tracks and responds to students’ emotions by monitoring facial expressions, body posture, and the context of their interactions. In practice, the system can provide hints or different stimuli to students who are becoming frustrated, confused, or bored, and then re-engage them.

“It is difficult to study emotions. They’re like snowflakes; every one is different. What attracts me to this work is the ability to do basic research on emotions first—which is the psychology side—and then use any insights gleaned to engineer systems that do something helpful in the real world—that’s the computing side.” 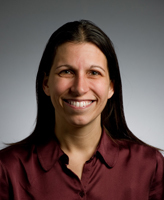 Laurel Riek is another recent faculty hire who is connecting aspects of psychology and computer science. Named CSE’s new Clare Boothe Luce Assistant Professor, Riek studies human-computer interaction with a focus on robots that can help the elderly and disabled function more independently.

Riek also serves as the director of the University’s Robotics, Health, and Communication Lab, which applies its research to health, education, and quality-of-life issues.

Several other faculty are also engaged in the growing collaboration between psychologists and engineers at Notre Dame.

Psychology Professor Laura Carlson explores spatial language and cognition—such as the processes that underlie the way people give and receive directions. She is currently working on a project that enlists “a head-mounted, virtual-reality system for collaborative research at the interface between spatial cognition and engineering.” Her research partners from the College of Engineering are Panos Antsaklis and Steve Batill.

Psychology Associate Professor Chuck Crowell and engineering colleagues Jim Schmiedeler and Aaron Striegel are also working with a grant of nearly $500,000 to study the use of gaming devices such as Nintendo Wii in balance rehabilitation for stroke patients. 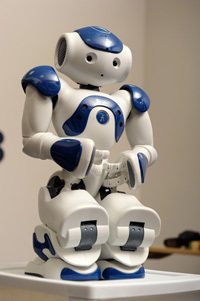 On yet another research front, assistant psychology professors Joshua Diehl and Michael Villano, along with Crowell and University of Texas Southwestern Medical Center’s Lauren Schmitt, have a paper accepted for publication in Research on Autism Spectrum Disorders that explores the use of robots for individuals with autism spectrum disorders—the first-ever article on robots published in an autism journal.

“These are things that weren’t going to happen quickly in one department,” Bowyer says. “What we do together can change people’s lives and improve care. This collaboration grows the pie for both departments because we’re not worried about boundaries.”

Indeed, this work on Autism Spectrum Disorders is even developing strong ties between faculty in one department and students in another, such as Matt Pruitt, a CSE doctoral candidate, who is working as a researcher in Diehl’s F.U.N. lab for understanding neurodevelopment.

D’Mello says he and his fellow faculty plan to encourage more students to explore collaboration across the colleges. “It is a great opportunity for students from different backgrounds to work together and get exposed to multiple perspectives,” he says.

“In my opinion, the most interesting and fun work is at the boundaries of different fields.”