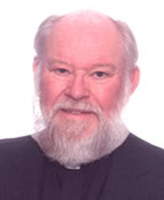 Though many know the Christmas lore surrounding jolly old St. Nicholas—the snowy-bearded saint whose legendary generosity morphed into America’s secular Santa Claus figure—few are familiar with the origins and details of his acts of kindness.

Rev. Nicholas Ayo, C.S.C., professor emeritus in the Program of Liberal Studies at the University of Notre Dame, is author of Saint Nicholas in America: Christmas Holy Day and Holiday, in which he takes a closer look at the saint whose feast the Catholic Church celebrates on December 6.

Using ancient and medieval sources along with more modern and widely known poems and stories, Ayo describes St. Nicholas (who also was the fourth century Bishop of Myra) as a powerful leader whose acts of kindness far surpassed the modern practice of candy in a shoe. He rescued many young women from sexual slavery; interceded on behalf of condemned prisoners; saved sailors from storms; and provided dowries to young women in the form of stockings of gold thrown into their chimneys.

So how can these gratuitous acts of kindness and generosity be proven hundreds of years later?

“Legends are not provable either way,” Ayo says. “But they tell you something about the human heart—they’re a treasure trove of what the human heart is all about. People wanted someone who cared about their needs, not because they earned or deserved it, but just because someone cared.”

All of St. Nicholas’ acts of kindness, according to Ayo, were committed without expectation or conditions, the fundamental departure from the secular Santa Claus, who only brings gifts “to good little girls and boys.”

“The conditional nature of gifts from Santa is all wrong,” says Ayo. “The meaning of Christmas is a gift from nowhere—we get gifts simply because—much like the gift of a bag or stocking of gold thrown in the window or down a chimney.”