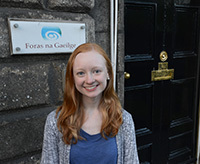 When Caitlin Myron ’13 first came to Notre Dame she had an interest in the Irish culture from her childhood, but never imagined it was something she would have the opportunity to study. Four years later, she is beginning a master’s degree in Modern Irish at the National University of Ireland.

“I hope that the degree will help me gain a more nuanced ability in the language and increase my knowledge of the Irish language literature,” she says.

Myron recently received a Fulbright scholarship, which will allow her to pursue her master’s degree in Galway, Ireland. She is the only American student to be selected this year and the first Notre Dame Irish language student to have this opportunity.

“Being a Fulbright student is a very prestigious accomplishment and a credential that will open doors for Caitlin throughout her professional career,” says Deb Rotman, director of the Center for Undergraduate Scholarly Engagement.

“The opportunities that she will have during her Fulbright year will allow her to interact with leading scholars in her chosen field, deepen her understanding of Irish language and literature, and develop her skills as an emerging scholar in her discipline.” 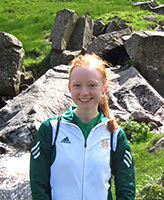 Myron grew up in an Irish family and was exposed to the Irish culture from an early age. She competed in Irish dancing as a child and can remember her grandparents telling her about their heritage.

“My grandfather used to speak Irish with his buddies in the pub,” Myron remembers. “I hadn’t been thinking of it as a foreign language that could be learned or studied academically until I got to Notre Dame.”

Despite her grandmother’s warnings that it would be a difficult language to master, Myron decided to try an Irish language course in the College of Arts and Letters.

“I’m fond of learning languages in general, and Irish is all the more special because I have a personal and cultural connection to it,” she says.

While at Notre Dame, Caitlin took full advantage of resources available to learn the Irish language. Tara Macleod, associate teaching professor in the Department of Irish Language and Literature, says she “always operated at a level far above what was expected for her class.”

“Her tenacity in pursuing opportunities to improve her language skills and her deeper understanding of the culture of Ireland allowed her to fully engage with Irish language texts,” MacLeod says.

Myron’s experiences abroad included taking an Irish language immersion course in County Galway, studying her junior year at Trinity College Dublin, completing an internship in Dublin through the Keough-Naughton Institute for Irish Studies, and conducting research in Dublin and Galway using a grant from the Undergraduate Research Opportunities Program.

“Spending time in Ireland and specifically in the Gaeltacht—Irish-speaking region of Ireland—gave me access to the culture that is key to understanding the language,” she says. “Building relationships with other Irish-speakers was crucial to my ability to communicate with ease.” 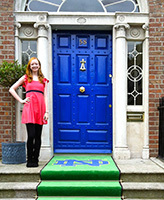 Along with the ability to speak Irish, Caitlin is fluent in Spanish as well. She began to notice common themes between Irish and Spanish literature while performing research for her senior thesis on Irish poet Seán Ó Ríordáin, and hopes to explore these connections in her future educational pursuits.

MacLeod says Myron’s expertise in these two languages will make her research unique. “Because Caitlin can work with both Irish language and Spanish language texts she will be able to work on comparative literature to examine some of the Irish themes outside of Ireland.

“This is not something that everyone can do, so her work will be highly original and will add to the canon of Irish studies.”

After completing her master’s degree, Myron hopes to pursue a career involving the Irish language, and eventually a Ph.D. in her field.

“Caitlin represents the kind of dynamic undergraduate experience we hope all students will have,” she says. “She went beyond classroom coursework to develop and flourish as a young scholar.”

Myron encourages students to take advantage of the many opportunities available—and to explore new areas of study.

“My on-a-whim decision to take an Irish language course demonstrates that students should always try the things that interest them.”