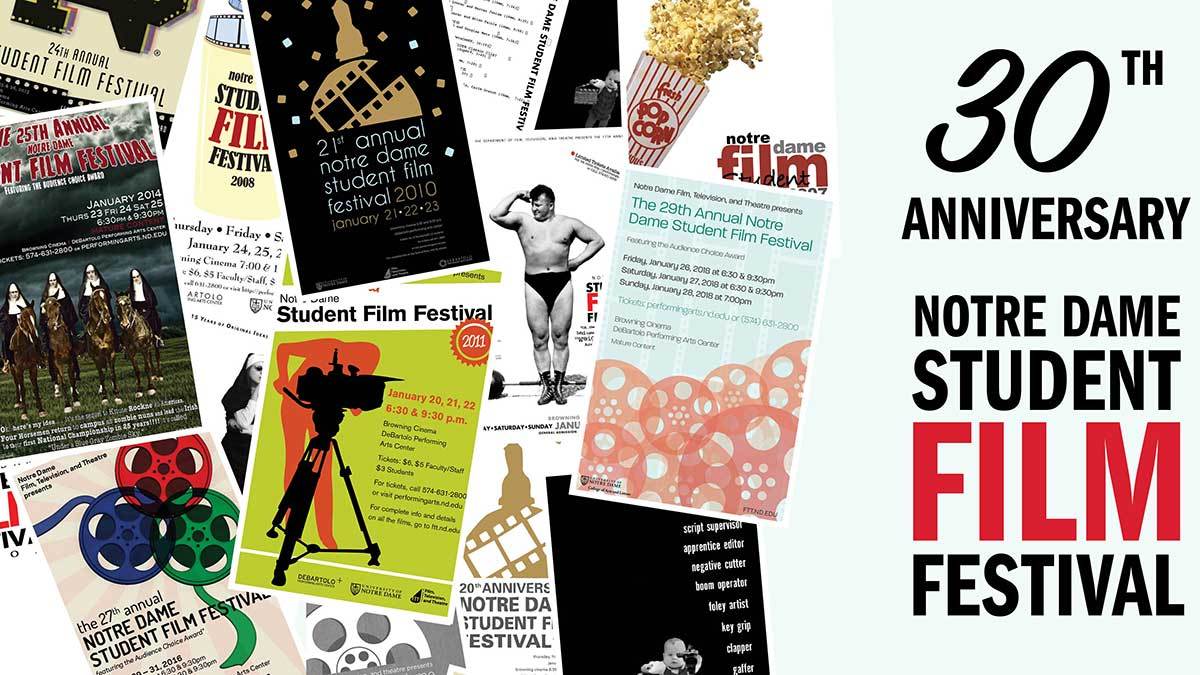 The University of Notre Dame’s Department of Film, Television, and Theatre (FTT) announces the 30th Annual Notre Dame Student Film Festival, in the Browning Cinema at the DeBartolo Performing Arts Center, January 25 through 27. As in recent years, audience members are invited to vote for their favorite film via text message. The Audience Choice Award will be presented to the student directors of the winning film after the final screening.

An annual launching pad for student filmmakers as they begin their careers in the film, television, and entertainment industries, the Notre Dame Student Film Festival screens films that were made by undergraduate students during the past year as class projects in the Department of Film, Television, and Theatre.

“It’s amazing to look back at 30 years of Notre Dame student filmmakers and see where they are now,” says festival founder and FTT faculty member Ted Mandell. “Netflix, Lionsgate, Dreamworks, Disney, HBO, NBC Universal, the list goes on and on. Writers, directors, producers, editors, and network executives, our alumni are truly some of the most creative professionals in the industry.”

The festival has featured the first films of future award winners such as Peter Richardson (2011 Sundance Film Festival Grand Jury Award winner, How To Die in Oregon) and John Hibey (2012 Sundance Film Jury Award Winner for Short Filmmaking, Fishing Without Nets), as well as numerous others. Many films from past festivals have also been selected for national and international film festivals, including:

Among the films featured in the 2019 Notre Dame Student Film Festival:

Shelter Me - Zach Lawson. The only hope for a million stray cats and dogs in Texas may be one woman … and her camera.

Emma. - Saskia Hennecke, Grace Tourville. Making the transition to college might be a challenge, but transitioning in college is definitely daunting.

Glacialis - Zach Huffer, Joey Warner. A scientist searches for the solution to save her town frozen in time.

Thou Shall Not Steal - Naj Harrabi, Hap Burke. Some home security systems are better than others.

Impression - Alex Mansour, Kenny Xu. A symphony of brush strokes paints the tale of a boy lost in the canvas.

Drift - Beatty Smith, Grace Tourville. Stranded on a country road? Welcome to the farmhouse over yonder.

Tickets: Tickets for the Notre Dame Student Film Festival are $7 for the general public; $6 for faculty, staff, and seniors (65+); and $4 for students. Tickets may be purchased online, by phone at 574-631-2800, or in person at the DeBartolo Performing Arts Center ticket office (M-F, noon-6 p.m.).

Parking: Free parking is available daily after 5 p.m. in the Stayer Center parking lot, just north of the DeBartolo Performing Arts Center. An accessible lot for disabled patrons is available immediately adjacent to the center; a valid hang tag or license plate is required. There is a 10-minute parking zone on the north drive of the center for ticket pick-up; during inclement weather you are welcome to drop off guests in this area and proceed to parking. Non-campus parking (free for the first two hours) is also available at Eddy Street Commons, just south of the center.