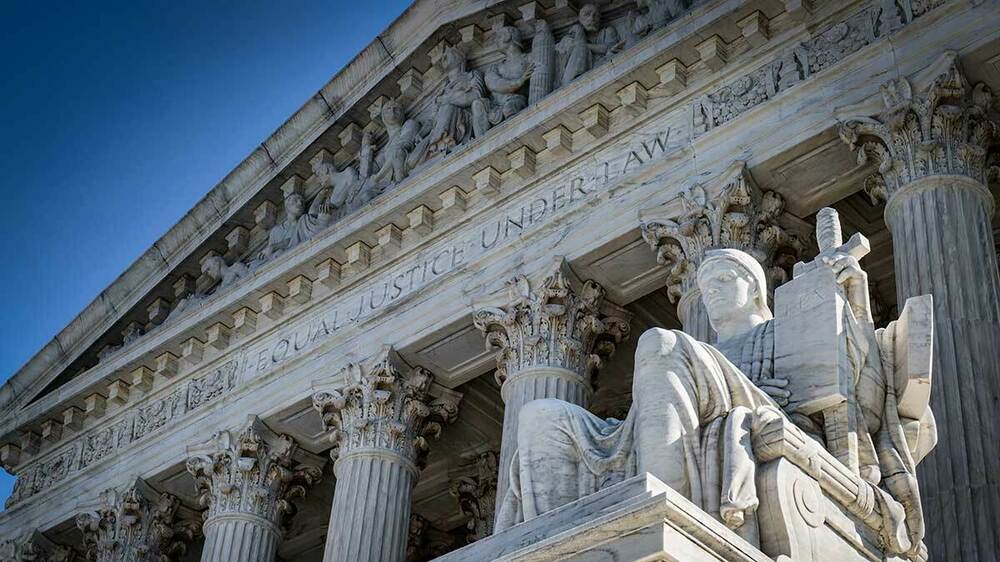 On the campaign trail, President Joe Biden committed to nominating a Black woman to any Supreme Court vacancy that might arise during his term in office. After Justice Stephen Breyer announced his retirement on Thursday, Biden reiterated his intention.

“The person I will nominate will be someone with extraordinary qualifications, character, experience and integrity. And that person will be the first Black woman ever nominated to the United States Supreme Court,” Biden said. “It’s long overdue in my view. I made that commitment during the campaign for president, and I will keep that commitment.”

Many are speculating that Judge Ketanji Brown Jackson is the frontrunner on Biden’s short list.

“Ketanji Brown Jackson has gotten stellar comments from many observers in the time since Breyer announced his retirement. She was recently confirmed by the Senate to the U.S. Court of Appeals for the Washington, D.C., Circuit, which is recognized as a pathway to the Supreme Court,” said Dianne Pinderhughes, a professor in the Department of Africana Studies and the Department of Political Science.

At only 51 years old, Brown Jackson could potentially serve on the court for decades, noted Matthew Hall, the David A. Potenziani Memorial College Professor of Constitutional Studies, professor of political science, concurrent professor of law and director of the Rooney Center for the Study of American Democracy.

“The D.C. Circuit is often a proving ground for Supreme Court nominees, and her confirmation would allow Biden to make another appointment to that powerful court,” Hall said. “Unfortunately, her nomination to the Court of Appeals was so recent that we do not have good data on her ideology, but it’s likely that she would reinforce the court’s liberal wing.”

However, Brown isn’t the only candidate with outstanding credentials, added Pinderhughes, who also holds a concurrent faculty appointment in American studies and is a faculty fellow at the Kellogg Institute for International Studies. South Carolina Congressman James Clyburn is a strong supporter of Michelle Childs, a federal judge who is currently a candidate for the U.S. Court of Appeals for the District of Columbia. Childs is only slightly older than Brown Jackson, so she too has the potential to serve on the court for many years.

“It was Clyburn who lobbied Biden during the presidential debate to commit to nominating an African American woman for the Supreme Court, the move that mobilized decisive African American support for Biden in the primaries,” Pinderhughes said. “Clyburn proposed Childs to Biden shortly after his inauguration, arguing that justices with greater diversity should be considered for the court. In this case, Clyburn is seeking to checkmate the candidacy of Brown Jackson, who attended both Harvard College and Harvard Law School.”

In another era, one might expect a president with struggling approval numbers facing an evenly divided Senate to select a very moderate nominee, but none of the incentives to do so are currently in place.

“The Republicans eliminated the use of the filibuster on Supreme Court nominations during President Trump’s term (after the Democrats had removed it for lower-court nominations under President Obama),” Hall said. “And President Obama’s experience with Merrick Garland demonstrates that, even when a Democrat nominates a moderate jurist, Republicans will still try to paint them as a radical. The only real limiting factor is obtaining support from Senators (Kyrsten) Sinema and (Joe) Manchin, which will likely be achieved behind the scenes before the nomination is announced.”

Some critics argue that Biden should pick the “best person for the job,” without consideration of race or gender. These critiques, however, ignore the fact that for most of the court’s history, race, gender and religion were key qualifications for the court, with only white Protestant men warranting consideration, noted Christina Wolbrecht, professor of political science and the C. Robert and Margaret Hanley Family Director of the Notre Dame Washington Program.

“These critiques also reveal a common problem with how we think about qualifications. There are, without question, many, many people with the qualifications — education, experience and ability — to sit on the nation’s highest court. There is no one best person, and every president decides on nominees on the basis of a range of considerations.”

Originally published by Carrie Gates and Colleen Sharkey at news.nd.edu on January 31, 2022.