Once viewed as a language of the poor and uneducated, and moribund for the last half of the 19th century, the Irish language has experienced a return to prominence – both internationally and at the University of Notre Dame.

After the potato famine of 1845-47 when thousands of Irish emigrated to the U.S to escape grinding poverty and starvation, those leaving Ireland also left behind their native tongue. 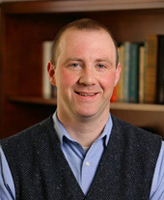 “The potato famine really was the turning point for the Irish language,” says Brian Ó Conchubhair, associate professor of Irish in Notre Dame’s Department of Irish Language and Literature and faculty fellow in the Keough-Naughton Institute for Irish Studies, a world class interdisciplinary research institute focusing on all aspects of Ireland heritage and culture.

“The language quickly became associated with poverty and illiteracy,” he says. “Immigrants recognized that English was considered the language of progress and success, and if they wanted to get through Ellis Island, they needed to know English.”

Irish was first taught at Notre Dame in 1868, considerably earlier than other universities in this country, and Notre Dame now is home to the only Department of Irish Language and Literature in North America.

“Many of our students—not all of whom come from an Irish-American background—are motivated by re-engaging with their cultural heritage, exploring complicated issues of identity and examining the struggle of minority cultures in the face of globalization and homogeny,” says Ó Conchubhair.

“Others just want to do something fun and different.”

Irish is often confused with Gaelic—technically the language of Scotland. Irish and Gaelic were once the same language, but diverged in the 16th century.

With the emergence of an Irish Language television station in the 1990s, together with a boom in the Irish economy, “Irish became seen as glamorous and successful; people wanted to speak Irish—almost a total inversion of what happened in the post-potato famine period,” Ó Conchubhair says.