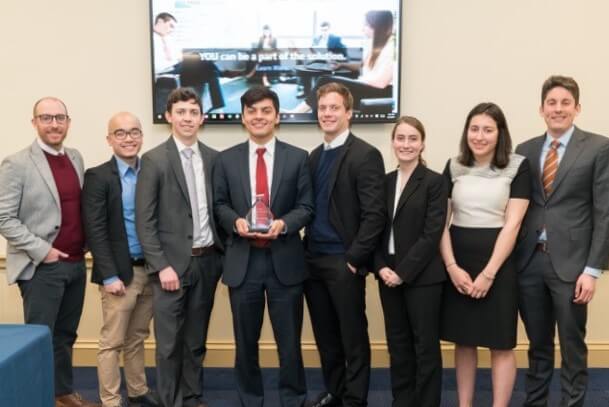 The Federal Reserve and Fiscal Challenge Club was formed last year to give MBA and undergraduate students real-world opportunities to employ the skills they were learning in class. This spring, the club entered the Fiscal Challenge, run by an educational nonprofit of the same name that aims to expand students’ understanding of fiscal policy through experiential education.

Notre Dame’s six-person team — which features five Arts and Letters students — developed a plan to stabilize the United States’ debt-to-GDP ratio at current levels through 2046. Notre Dame’s team was chosen as one of three finalists, along with Harvard and Northeastern University, to present its plan live and take questions from a panel of judges.

They went to Washington, D.C., in April for the finals, visiting Capitol Hill and meeting top thinkers in economic policy. And they won.

“We were not expecting it, since it was our first year, but we were happy our hard work paid off in that way,” said Emily Merola, a first-year student in the Department of Economics and secretary of the club.

Currently, the U.S. debt is about 77 percent of GDP, but that number is expected to nearly double in the next two decades. Jason Reed, an assistant teaching professor in the Department of Finance and an adviser for the club, said judges appreciated the club’s ability not only to meet the goal of stabilizing the debt-to-GDP ratio, but to actually lower it to 59 percent.

“They wanted to overshoot the goal of just stabilizing at 77 percent, because that 77 percent includes all the spending the U.S. had to do to get out of the Great Recession,” Reed said. “The proposals the club created were not just outside of the box, but changed what the box looked like. The judges were thoroughly impressed.”

Reed said he and Forrest Spence, an assistant teaching professor in the Department of Economics, wanted students to understand the complexity of developing policies that are beneficial and politically attainable, as well as how to measure impacts of those proposals on different groups of people and government agencies.

Merola said she and fellow club members enjoyed the opportunity to put classroom lessons to use.

“The best type of learning is when you can get involved in actual applications of it,” she said. “That’s one of the reasons I came to Notre Dame, and I’m glad I could find a club to give me that opportunity.”