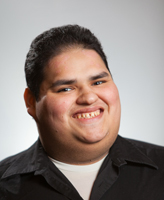 Diaz might be hearing that old stage charm at an extraordinary venue later this month—the Basilica of St. Peter in Rome—where he and about 50 other members of the Notre Dame Chorale are scheduled to perform for Pope Benedict XVI and the bishops and pilgrims in attendance at a general audience on May 25, 2011.

The vagaries of the Vatican schedule mean that the performance will remain tentative right up to the last second, but the Chorale will definitely get to perform for the Vatican’s resident and visiting cardinals during the Archpriests Mass at the Altar of the Chair at St. Peter’s on May 28. The singers are also scheduled to give concerts at the Basilica of St. Francis in Assisi on May 27 and Rome’s St. Ignatius Church on May 29.

Diaz, a chorale veteran who plans to pursue a career in opera performance after college, is the only undergraduate slated to conduct during the Chorale’s eight-day tour.

“I haven’t done anything on this scale before,” says Diaz, who has been involved in sacred music for most of his life. His father, Frank, is the director of music at the Cathedral of the Sacred Heart in San Angelo, Texas.

“It’s really exciting to have this opportunity,” Diaz says. “It’s a privilege that not a lot of people get to have.”

While excited, Diaz says he is not particularly nervous about the prospect of a papal performance—a fact he attributes to the discipline and professionalism of the Chorale, which includes students from across the University, not just music majors.

“The group is very strong musically,” he says, “and able to do some difficult work”—including one of the pieces he is planning to conduct, “_Svéte tíhiy_” (“Gladsome Light”) a Russian romantic composition by Alexander Gretchaninoff.

“[As a conductor], they make my job very easy,” Diaz says. 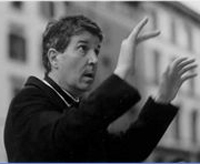 Alexander Blachly, a professor of music and the University’s director of choral activities, says he’s supremely confident in the chorale’s ability to respond well under pressure. “We will be prepared,” he says.

“It’s very like a sport in a psychological respect,” Blachly says of the hours of devoted work leading up to a performance. “It’s a team effort; the group is relying on each of them member. As individuals and as a group, they have to get it right. And they’ve worked hard on a lot of exacting details like how to stay in tune, how to listen, how to hear the other parts when they’re singing their own parts.

“That’s not easily done,” he notes.

Singing as a choir at a high level may be an intellectually and physically demanding effort, but it is one they all love, Blachly says. “We’re working, but it’s a very pleasurable kind of work,” he says. “We are making music.”

The Chorale has been practicing a number of selections in preparation for their church concerts. “We’ve got an a cappella program that runs from the 12th century to the 21st century," said Blachly, "from Gregorian chant and two medieval pieces all the way to a piece composed in 2005.” The Chorale will perform that final selection, Christe qui lux es et dies, composed by the professor’s son, James Blachly, for the pope during the general audience if they get the chance. 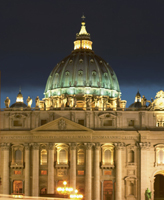 Preparing for live performances wasn’t the only hard work leading up to the eight-day concert tour, says Stephen Santay, a senior and the president of the Chorale. He and his fellow Chorale members led a variety of fundraising efforts—including selling the Chorale’s CDs and brats and burgers during home football games—in order to get the costs down to a manageable level.

A $20,000 grant from the University’s Nanovic Institute for European Studies was a tremendous help, he says. Among other things, the funding will provide for lectures on the history of Rome and its architecture to help students get the most from their trip.

Santay expects this once-in-a-lifetime opportunity to be among his most memorable experiences as a Notre Dame student. “We are all very excited, and I would say the most exciting thing is the possibility of performing for the pope.”

But, he adds, “I think singing the Notre Dame alma mater in St. Peter’s square would be just fantastic.”