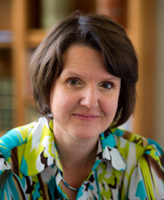 Ancient philosophers such as Plato, Socrates, and Aristotle can offer a surprisingly fresh perspective on our modern political and cultural challenges. And at the University of Notre Dame, the Workshop on Ancient Philosophy is the forum for graduate students and faculty to study and share these insights.

Directed by Professor Gretchen Reydams-Schils, who teaches philosophy in the College of Arts and Letters’ Program of Liberal Studies and has concurrent appointments in the Philosophy and Theology departments, the annual series of events is now in its ninth year and has proven to be a rigorous and relevant venue for learning for scholars from all across the College.

Interest in the workshop has been strong, Reydams-Schils says, because ancient philosophy is indispensible for Notre Dame faculty and graduate students working on many different topics within the humanities.

“Ancient philosophy is unique in that it demands tremendous linguistic and philological skills for those wishing to be specialists in the field,” she says, “and yet the subject readily lends itself to interdisciplinary study because of the holistic picture of human knowledge it presents.”

Whether you want to achieve a comprehensive grasp of modern political theory, the question of virtue, contemporary ethics, or theology, she says, “You need ancient philosophy to do this well—you need Aristotle, you need Plato, you need the broad view of ancient philosophy that also includes a Cicero, a Philo of Alexandria, or authors of Late Antiquity.”

What has been appealing to funders—which include both the Earhart and Andrew W. Mellon foundations—and participants alike is what Reydams-Schils calls the program’s “bang for the buck.” The scholars who participate in the workshops are drawn from seven different academic departments and institutes: Philosophy, Classics, Theology, Political Science, Program of Liberal Studies, German and Russian Languages and Literatures, and the Medieval Institute.

With so many researchers from a cross-current of complimentary fields, the workshop is an effective and efficient way of provoking dialogue.

“There’s so much talk about the importance of interdisciplinary efforts, but that sometimes is difficult to do,” Reydams-Schils says. “This was just a natural to make the most out of the riches that we already have here.”

Invited speakers from other universities, including many non-U.S.institutions, are also eager to get on the workshop schedule, she says, because the discussions provoked during the sessions often help hone their thinking or even redirect their research.

Moreover, it is an ideal forum to integrate additional learning opportunities for Notre Dame’s graduate students. Through these types of scholarly interactions, she says, “they get to see how research happens.”

“This is, in a way, another great apprenticeship program for graduate students.” 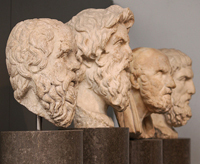 Particularly enlivening to both the workshop’s presenters and participants is the nature of the dialogue they can expect at Notre Dame. “You really could not do this anywhere else, given the astonishing range of disciplines we currently represent,” Reydams-Schils says.

In addition to this scholarly depth, she says, Notre Dame also provides an academic arena that is hospitable to exploring religious and spiritual aspects of the western philosophical tradition that at another university might be downplayed or ignored.

A recent presenter who discussed the religious aspects of Socratic thought told Reydams-Schils he could not imagine that avenue of research being properly appreciated at many other places besides Notre Dame.

“There is a real genuine interest in those spiritual aspects that are treated as marginal elsewhere,” she says.

This is evident as well in the workshop’s first post-doctoral fellow funded by an external grant. Wiebke-Marie Stock, who was awarded a two-year Feodor Lynen Research Fellowship from the Alexander von Humboldt Foundation, has a background in classics, philosophy, art history, and early Christianity. She is affiliated with the Institut für Philosophie of the Free University of Berlin and is currently on a Martin Buber Society fellowship at the Hebrew University in Jerusalem.

For her research project at Notre Dame, Stock plans to work on images in late antique theories of the soul, including Christian views.

“This profile is an ideal fit for the workshop’s multi-disciplinary approach,” Reydams-Schils says.

Since 2002, the Workshop on Ancient Philosophy has co-organized seven conferences, hosted 69 speakers (including 23 from outside the United States), assisted in the development of 15 dissertations, provided mentoring for several hundred graduate students, inspired 10 major publications, and hosted four issues of Plato, the online journal of the International Plato Society.

The workshop has already hosted three lectures from visiting scholars this fall, with more planned throughout the 2011-12 academic year.

The next event, set for October 28, is a review of the meaning of method in Aristotle by James Lennox, a history and philosophy of science professor from the University of Pittsburgh.

On November 10, Victor Caston, professor of philosophy and classical studies at the University of Michigan, will give a presentation titled “Aristotle on Perceptual Content.”