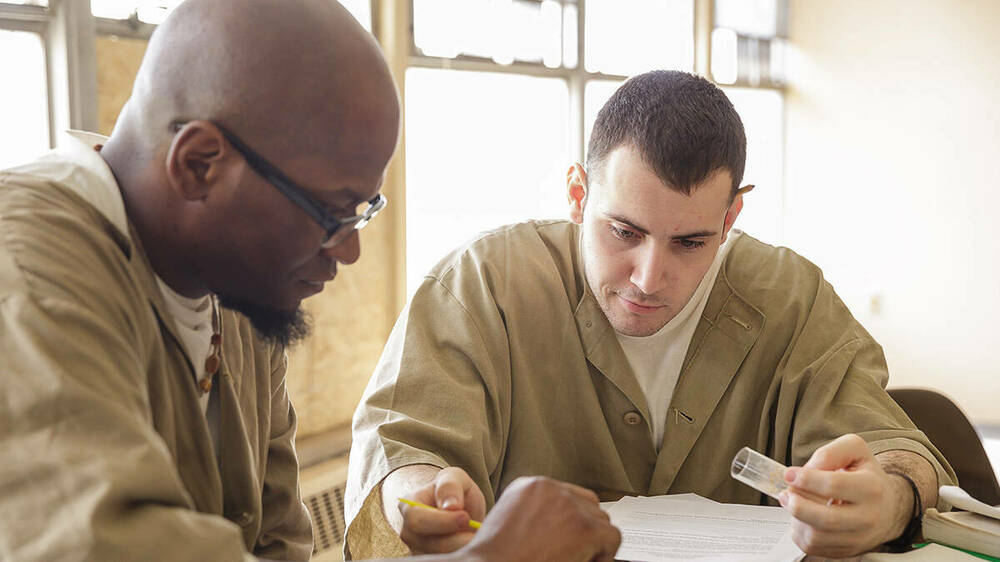 The Moreau College Initiative is a liberal arts degree program founded in 2013 that offers incarcerated men in correctional facilities across Indiana access to a world-class liberal arts education. To date, it has awarded 102 associate and 29 bachelor’s degrees to students at Westville Correctional Facility.

A new prison education initiative will bring five local, state and national prison education programs together in one effort to be housed at the University of Notre Dame’s Center for Social Concerns. Notre Dame Programs for Education in Prisons (NDPEP) will offer opportunities for liberal arts education to people incarcerated in Indiana, create the infrastructure to support NDPEP participants as they re-enter their home communities, and provide faculty and student opportunities for education and research on issues related to incarceration.

“NDPEP represents a wonderful way for Notre Dame to live out its Catholic mission and to be a healing and unifying force for good,” said Rev. Robert A. Dowd, C.S.C., vice president and associate provost for interdisciplinary initiatives. “It not only provides people who are incarcerated with opportunities to learn and to chart a new way forward for their lives, but it also allows our faculty and students to apply their skills and deepen their understanding of the challenges faced by our society’s corrections system.”

NDPEP will include the Moreau College Initiative, the Women’s College Partnership, Inside-Out, the Shakespeare in Prisons Program and the Indiana Prison Liberal Arts Network (IPLAN).

“The center is focused on engaging injustice wherever it occurs, and we’ve seen for decades that it’s occurring in the U.S. prison system, so housing the network at the center makes a lot of sense,” said Suzanne Shanahan, the Leo and Arlene Hawk Executive Director of the Center for Social Concerns. “We’re looking forward to the rich possibilities for research and education that will grow from the move.”

The Moreau College Initiative and the Women’s College Partnership are liberal arts degree programs that were launched in collaboration with the national Bard Prison Initiative (BPI) and are part of the BPI Consortium for the Liberal Arts in Prison, a network of 15 college-in-prison programs across the country. BPI was founded by Bard College undergraduates in 1999 and now operates in seven interconnected prisons in New York state.

The Moreau initiative was founded in 2013 as a joint academic collaboration of the University of Notre Dame and Holy Cross College. Its mission is to ensure that incarcerated men in correctional facilities across Indiana have access to a world-class liberal arts education. To date, it has awarded 102 associate and 29 bachelor’s degrees to students at Westville Correctional Facility. The Women’s College Partnership launched in January 2019 in partnership with Marian University and the Indiana Department of Corrections. It has awarded 10 associate and five bachelor’s degrees.

“(Mass incarceration) isn’t just an individual problem, but a broad social concern we should all care about. The center will provide a rich interdisciplinary community that unites disparate efforts across the University and state all aimed at addressing issues that stem from incarceration.”

— Anna Haskins, the Andrew V. Tackes Associate Professor of Sociology and a member of the Moreau steering committee.

“Housing NDPEP at the Center for Social Concerns is a recognition of the impact of mass incarceration for society as a whole,” said Anna Haskins, the Andrew V. Tackes Associate Professor of Sociology and a member of the Moreau steering committee. “It isn’t just an individual problem, but a broad social concern we should all care about. The center will provide a rich interdisciplinary community that unites disparate efforts across the University and state all aimed at addressing issues that stem from incarceration.”

In 2012, the Center for Social Concerns launched its Inside-Out course as part of the national Inside-Out program. The course offers a restorative justice approach as an alternative to the current criminal justice system. “Inside” students at the Westville Correctional Facility and “outside” students from Notre Dame attend the class together at the correctional facility.

Also formed in 2012, the Shakespeare in Prisons Network is a loose affiliation of programs in prisons nationwide. The network’s mission is to bring Shakespeare to incarcerated populations through ongoing classwork, education and performance, and to instill vital skills for social re-entry. Shakespeare at Notre Dame is a part of the network, offering a regular class at Westville Correctional Facility.

IPLAN was created in July by the University of Notre Dame, Holy Cross College and Marian University to expand existing prison education programs while catalyzing new, collaborative efforts of higher education institutions across the state and around the country. It is designed to serve as a statewide training and advocacy center, as well as a national resource on college-in-prison higher education for organizations and educational institutions.

In mid-November, the University will formally announce NDPEP’s formation, scope and resources, highlighting the integration with the Center for Social Concerns in an event with national, state and local partners.