The average global temperature at the Earth’s surface could increase as much as six degrees Celcius by 2100, according to a 2007 report by the Intergovernmental Panel on Climate Change. If that happens, the impact would reach far beyond hot summers and rising sea levels to affect society in complicated ways.

And the question, say researchers at Notre Dame, is not only how to slow or stop climate change but also how to adapt and live with the consequences of climate change.

To do just that, a group of faculty at the University have created the Collaboratory for Adaptation to Climate Change. Funded by a Cyber-Enabled Discovery and Innovation grant from the National Science Foundation’s Office of CyberInfrastructure, the project engages principal investigators from a variety of academic disciplines across campus: from Debra Javeline in political science and Omar Lizardo in sociology to Jessica Hellmann and Jason McLachlan in biological science, Nitesh Chawla in computer science and engineering, and Jaroslaw Nabrzyski in the Center for Research Computing.

The project’s initial function is to collect survey data on expert opinion about adaptation to climate change, climate data, ecological data, and legal and regulatory data and to develop novel computational tools that help researchers and managers grapple with the effects of climate change. The project will then make the data and tools available and the research results searchable. It will also will provide a database of regulations and laws that pertain to climate change adaptation.

Together, these tools will enable anyone interested in climate change—most likely scientists and field practitioners like conservationists—to make better decisions about climate change adaptation. 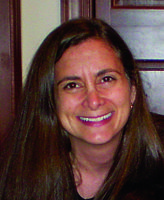 According to Javeline, an expert in survey research methodology, studies typically look at how to slow climate change—but considering how and why to adapt is also crucial. That’s the collaboratory’s niche, she says, and it allows access to research in real time—getting and distributing data as it is gathered instead of waiting years before action is possible.

Accessing experts’ research and their adaptation conclusions means that people can make decisions based on comprehensive, scientifically significant information, she says.

“For the first time we can say what thousands of scientists are thinking because their data will be available in the collaboratory,” Javeline says.

A large number of data, along with computational tools, will be publicly available and likely applied to make decisions in countless fields. In biology, for example, scientists might run simulations about whether and where to introduce non-native species of trees. In government, policy makers might use it to develop regulations for animal relocation. City planners might use the collaboratory to decide how to deed and allocate land.

Hellmann says the project in later phases may include more disciplines.

According to Chawla, the collaboratory is like a public sandbox: anyone can contribute, and everyone involved can see the simulations that others are running. Because having so much data requires sizeable computing power, the University’s Center for Research Computing will oversee this aspect of the project.

As for what comes next, Chawla, an expert in data mining and network science, also is considering the impact the collaboratory itself will have.

“We plan to study how people incorporate the database information into decision making,” he says, “and examine the impact of information and evidence on people.”