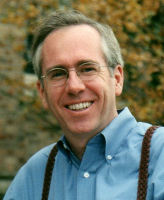 In his latest book, Why Choose the Liberal Arts?, former Notre Dame College of Arts and Letters Dean Mark Roche explores the enduring value of a classic, liberal arts education.

“Such an education helps students to develop formal skills that will allow them to flourish, whatever career paths they might choose or life choices they might make over time; indeed, many of the skills they develop will reveal their significance only later in life,” says Roche, the Rev. Edmund P. Joyce, C.S.C. Professor of German Language and Literature and concurrent professor of philosophy.

In his book, Roche develops three overlapping arguments for a strong liberal arts education: first, the intrinsic value of learning for its own sake, including exploration of the profound questions that give meaning to life; second, the cultivation of intellectual virtues necessary for success beyond the academy; and third, the formative influence of the liberal arts on character and on the development of a sense of higher purpose and vocation.

Together with his exploration of these three values—intrinsic, practical, and idealistic—Roche reflects on ways to integrate them, interweaving empirical data with personal experience.

“Even if my second chapter, on the practicality of a liberal arts education for future employment and leadership opportunities, may resonate the most with students and their parents, it is important to remember that it is not the only rationale for having such an education,” Roche says. “If we reduce the purpose of education to that of getting a job, we have failed to adorn it with higher meaning. Even more than awakening a deeper meaning in work, a liberal arts education gives graduates a direction for life.”

He points to Socrates, who “made it clear that learning is most important and most successful when students are engaged in meaningful discussions, asking questions that will determine who they are and what they think about life’s most significant issues.”

What is human excellence? What is friendship? Love? Courage? How do we learn? What constitutes the just state? It is through the study of such questions that students develop vital skills in reading, writing, speaking, and critical thinking, Roche says.

“To know something is not simply to mimic the truth but to be able to give reasons and arguments for that truth,” Roche says. “This level of reflection ensures that the student will be able to defend a view against the arguments of future opponents instead of just succumbing to their persuasive rhetoric, will be ready to apply knowledge in changing circumstances, and will be equipped to build on existing knowledge and extend it—via the same principles of searching inquiry and rational reflection—into new areas.”

Roche is the author of seven books, including Why Literature Matters in the 21st Century and the Intellectual Appeal of Catholicism and the Idea of a Catholic University. He also served as dean of Notre Dame’s College of Arts and Letters from 1997 to 2008.

“Parents, students, and scholars will all benefit from Mark Roche’s savvy mix of hard-won practical advice and inspiration,” says John McGreevy, the current I.A. O’Shaughnessy Dean of the College of Arts and Letters. “His dedication to the ideals—and value—of a liberal arts education propelled the remarkable advances in the College of Arts and Letters during his tenure as dean.”