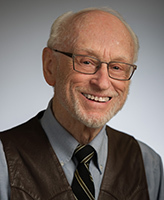 Ken Sayre’s Adventures in Philosophy at Notre Dame, a narrative history of nearly 80 years, divides the decades into three distinct periods: textbook Thomism, pluralism, and professionalism. Sayre, who came to Notre Dame in 1958 with a Ph.D. from Harvard, has witnessed them all.

“I’ve been at Notre Dame continuously for 55 years,” he says, “except for visiting appointments at Princeton, Oxford and Cambridge. This is one thing that qualifies me to take on the project.

“For decades, people who had been around the department for a while, my generation, had thought it would be a good idea if there were a history of the department, particularly since we viewed the era that we share together back in the ’60s and ’70s as its golden years.”

As the old philosophers faded away one by one, a new crop of faculty took up the notion of a department history in conversations that included the obvious writer. “Everybody was looking at me,” he says.

Sayre had just finished his 18th book, on the current environmental crisis, and was looking around for another project, so he accepted the challenge. The department provided some financial support, but no time off. The product was written from his perspective, and unexpectedly provided a revelation about his own career.

“One of the most fascinating aspects of writing this history has been that I now have come to understand things going on decades ago in which I participated,” he says. “I played a part in these events, but didn’t really know what was happening. I now understand my own career much better.”

Sayre, whose expertise spans environmental ethics, artificial intelligence and epistemology, is best known for his work in ancient Greek philosophy, especially Plato. His history is divided into eight chapters, each covering roughly a decade and focused on a leading figure in the department with dozens in the supporting cast.

“I have made an extended effort, largely successful, not to say anything bad about anybody,” he says. “The history is not in any sense a critique of what has been going on here. It is just an account of the department that calls the shots as I see them.”

The narrative opens with the textbook Thomism that prevailed from the mid-1930s until the cusp of the Second Vatican Council in the early 1960s. From the mid-1960s to the mid-1980s, pluralism prevailed under the influence of Rev. Ernan McMullin, with Thomism only one among many different traditions studied. By the end of the 1980s, after incremental changes, the department had become professional.

“There are lots of different specialties, but there aren’t many pluralists left, and the department is not organized in a pluralistic manner. The thing emphasized in a professional department is reputation.”

Professionalism has downplayed the department’s Catholic identity, says Sayre, who was its first non-Catholic faculty member (he later converted). His history recounts an attempt by a Catholic minority, led by Ralph McInerny, to set up a “counter department” in the Maritain Center.

McInerny’s controversy with other department members led by McMullin climaxed in 2009, Sayre says, with the invitation to President Barack Obama to receive an honorary degree and deliver the commencement address. “My history covers the commencement at great length from a first-person perspective. I was seated right next to the main platform.”

“The plot of the book converges on this event,” he says, adding that President Rev. John I. Jenkins, C.S.C., who earned two degrees in the department in the 1970s, served as mediator between the two factions. “The controversy splintered the department, but in ways that had no effect on its professionalism.”

Sayre exhorts the factions to rejoin forces with a common goal in view. “Otherwise, the department may become little more than a second-tier research center that happens to be located at a Catholic university.”