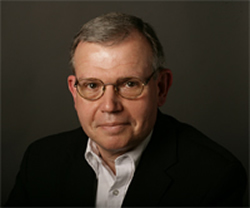 Macaulay: The Tragedy of Power, by Rev. Robert E. Sullivan, associate professor of history and associate vice president for academic mission support at the University of Notre Dame, recently was published by Harvard University Press.

Since his death 150 years ago, English historian, politician, public intellectual and Victorian icon Thomas Babington Macaulay has been remembered as the author of the influential History of England, as an imperial administrator who made English the common language of India and gave that country a system of criminal law which survives to this day, and as a pioneering and effective apologist for English nationalism. The sales of his popular books on both sides of the Atlantic often rivaled those of Charles Dickens.

But it was principally Macaulay’s erudition that drew Father Sullivan’s interest.

“Today Macaulay is usually remembered as a humane ancestor of liberalism,” Father Sullivan said. “But seven years ago I was interested in him as a devoted student of the Greek and Latin classics.”

Reading “Sir William Temple,” an essay by Macaulay on the 17th-century English diplomat, Father Sullivan noticed a remarkable comment regarding Oliver Cromwell’s brutal invasion of Ireland in 1649. Nonchalantly dismissing Cromwell’s mass murder as a disagreeable but unavoidable imperial responsibility, Macaulay wrote, “For it is in truth more merciful to extirpate a hundred thousand human beings at once, and to fill the void with a well-governed population, than to misgovern millions through a long succession of generations.”

“What Macaulay urged came as a thunderstroke,” Father Sullivan said. “He wasn’t joking. Sometimes rephrased and never suppressed, his endorsement of ‘civilizing slaughter’ in Ireland and elsewhere remained in print until 1974. You can read ‘Sir William Temple’ as a Google book.

“Even more disconcerting was that nobody seems to have cared, or even noticed, until the 1990s, and then only in a couple of confused footnotes.”

Father Sullivan said his new biography “tries to solve two mysteries: What caused Lord Macaulay to become the first responsible European to espouse ‘civilizing slaughter,’ or, if you prefer, ‘ethnic cleansing’? Why the vast silence about his sinister prophecy?”

Whatever account may be given of that silence, Father Sullivan argues that it is more than a mere historical curiosity, concluding that “much that maimed the 20th century derived from what Macaulay taught his contemporaries to see as reasonable.”

Aside from an excitable critic in the Wall Street Journal, who complained that Father Sullivan seems “as eager to sniff out racism as Al Sharpton,” the biography has received high praise in early reviews.

According to Frank M. Turner, John Hay Whitney Professor of History at Yale University, Father Sullivan’s book is “a probing, convincing, and ultimately devastating portrait of the mind of a liberal imperialist that transforms our understanding of Macaulay. Victorian intellectual history has no similar study.”

Ciaran Brady, lecturer in history at Trinity College Dublin, praised Macaulay as “a boldly original but elegantly executed book” in which Father Sullivan “coolly subverts many of the central preconceptions through which we have conventionally interpreted Macaulay. By focusing on several aspects of Macaulay’s intellect hitherto discounted or entirely neglected…Sullivan has produced a more complex—and darker—portrait of the great Victorian than has ever before been conceived.”

Originally published at newsinfo.nd.edu on December 11, 2009.