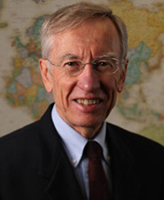 As bloody clashes continue in Libya between government forces and anti-regime protesters, Robert Johansen, professor of political science and senior fellow at the University of Notre Dame’s Kroc Institute for International Peace Studies, says establishing a “humanitarian corridor” in an area of Libya already under opposition control would provide a nonviolent, inexpensive way to save lives.

“The United Nations Security Council could establish a secure ‘humanitarian corridor’ protected by an international coalition of forces,” Johansen says, “and ask high-level Libyan civilian and military officials, police, and armed security forces to change sides, relinquish any arms they are carrying and come to the humanitarian corridor. There, UN officials would verify their identity and confirm their choice to bring their conduct into conformity with international humanitarian and human rights law. If they do this, the Security Council could assure them they will not be prosecuted for past misconduct. On the other hand, those who continue to remain loyal to Gaddafi’s illegal commands after this UN invitation, which would expire within a few days, would be prosecuted to the full extent of the law.”

To appeal to those with personal loyalty to Gaddafi, Johansen says the UN could ensure it will not demand his confession of guilt, nor seek his death, but must insist he stand trial before an impartial international tribunal. Therefore, any Libyans who change sides now would be promoting a fair trial for Gaddafi.

Johansen proposes that the Security Council establish the corridor in an area of Libya already under anti-regime control, preferably near the coast where external forces can offer maximum protection at minimal cost.

“To secure it, some international coalition forces would need to be present on land, sea, and in the air,” Johansen says.

The costs of these operations could be paid for from Gaddafi’s financial holdings or Libyan overseas assets.

A founding faculty member of the Kroc Institute, Johansen’s research and teaching focus on the United Nations and the maintenance of peace and security, and peace and world order studies.