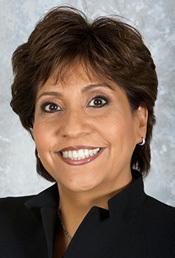 The Institute for Latino Studies at the University of Notre Dame will present “A Place at the Table: A Conversation with Janet Murguía on the Latino Agenda in 2010” Feb. 16 (Tuesday) at 4 p.m. in Room 210-214 of McKenna Hall on the Notre Dame campus. The event is free and open to the public.

Murguía is president and chief executive officer of the National Council of La Raza (NCLR). As someone who has experienced the promise of the American dream firsthand, Murguía has devoted her career in public service to opening the door to that dream to millions of American families. Now, as a key figure among the next generation of leaders in the Latino community, she continues this mission as leader of NCLR, the largest national Latino civil rights and advocacy organization in the United States.

Since 2005, Murguía has sought to strengthen NCLR’s work and enhance its record of impact as a vital American institution. One of her first priorities was to harness the power of the nation’s nearly 50 million Latinos and improve opportunities for Latino families by strengthening the partnership between NCLR and its network of nearly 300 community-based affiliates, which annually serve millions of people in 41 states, the District of Columbia, and Puerto Rico.

Murguía also has sought to strengthen the Latino voice on issues affecting the Latino community, including education, health care, immigration, civil rights, the economy, and the rise of hate rhetoric and hate crimes targeting Latinos.