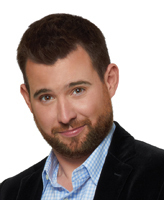 Notre Dame Department of Music alumnus Patrick Dupré Quigley’s latest project topped the iTunes classical charts when it was released in August. And for a brief time, the recording was even more popular in the iTunes all-genre category than superstar Lady Gaga’s “The Fame Monster.”

Quigley is the founding artistic director of Seraphic Fire, a Miami-based ensemble of professional singers that performs a variety of choral works, including classical, contemporary, sacred, and secular.

The group’s self-released album—Claudio Monteverdi: Vespers of the Blessed Virgin 1610—is new interpretation of the famous piece. Seraphic Fire and the Western Michigan University Chorale recorded it together in a little stone chapel, using only three instrumentalists instead of a full orchestra.

In a recent interview on NPR’s “All Things Considered,” Quigley says he got the idea for the intimate recording by examining the composer’s notes in the actual score. 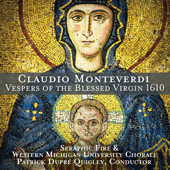 “When we take a step back and look at the words that Monteverdi himself wrote in the print, we see that the word ‘optional’ is used a whole heck of a lot,” he says.

After graduating from Notre Dame in 2000, Quigley got his master’s in conducting from Yale University. He founded Seraphic Fire in 2002, when he was just 24. Two years later, Quigley became the youngest-ever recipient of the Robert Shaw Fellowship, which the National Endowment for the Arts and Chorus America give to one promising early-career conductor each year.

Seraphic Fire is known for its high-quality and exciting performances of Baroque and New Music. The group appeared with international pop star Shakira, singing the opening Gregorian-style chant on her platinum-selling album Oral Fixation 2. In addition to its international concerts, Seraphic Fire performs full seasons in several South Florida cities, including Miami Beach and Ft. Lauderdale.