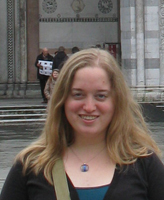 Prominent in both Greek mythology and Catholicism, the labyrinth remains one of the most enigmatic and elaborate structures in history.

Notre Dame senior Maria Martellaro traveled to Italy and France this past summer in attempt to unravel this mystery for her senior thesis on the labyrinth and its role in late medieval religious architecture.

“How did this [element of a] classical, very pagan myth,” she asks, “work its way into becoming a Catholic symbol?”

Going to the Source

Martellaro’s research abroad was supported by an Undergraduate Research Opportunity Program grant from the College of Arts and Letters’ Institute for Scholarship in the Liberal Arts—and being able to make the trip was a key part of her senior thesis, she says. 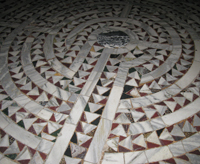 “It was important for me to be able to go to these sites and see the labyrinths in person as there are very few photographs,” she explains. “Part of the problem is that most labyrinths are on the floor, and no one looks at their feet. In San Vitale in Ravenna, Italy, for example, people have extensively photographed the famous mosaic ceiling, the artistic walls, and the illusion-filled dome, but no one seems to have photographed the floor.”

Martellaro traveled to six cities in all, paying close attention to the connection between the architecture of central Italy and northern France and how it helped propel the labyrinth into a popular design element. Her first stop was Chartres Cathedral in France.

“It was the perfect site to start my research,” she says. “On a personal level, the energy of all the people in the cathedral that day was just amazing to experience. On an academic level, Chartres has by far the most well-known labyrinth and is the site that helped spark new interest in labyrinths around the world.” 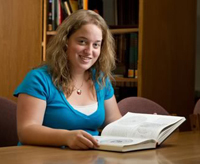 To develop her senior thesis, Martellaro worked closely with Professor Charles Barber and Assistant Professor Danielle Joyner, both specialists in Medieval art history. Joyner contributed greatly in advising her thesis, Martellaro says, while Barber was instrumental in helping her find the right path when it came to choosing a topic.

The subject was particularly appealing, she says, because it offered an opportunity to combine aspects of both of her majors: medieval studies and Greek and Roman civilizations.

“The labyrinth is such a classical idea,” she says, citing the Greek myth of Theseus and the Minotaur, “but then they appear in Catholic churches, which intrigued me.”

Even more mysterious, Martellaro says, was the religious function of the labyrinth. 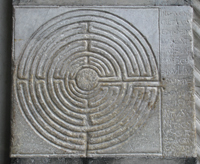 “I just learned how many unanswered questions there are about the labyrinths,” she says. “I saw them in person, I read as much information as I could find, and I went through I don’t know how many books, and nobody can say for sure what they were used for. We have absolutely no idea why they are there.”

Martellaro, who used her senior thesis as the primary writing sample in applying to graduate programs in medieval studies and classics, says she isn’t finished exploring the answers to those and other questions about the labyrinth.

“There are so many different aspects of it to look at,” she said. “I would really love to keep working on it, because it’s so interdisciplinary. You can work on just about anything with it—art, art history, iconography, theology, history, math.”