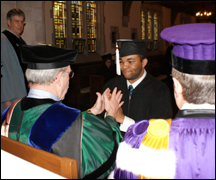 When it comes to Commencement ritual and symbolism, it’s hard to outdo students in Medieval studies, who don’t feel they’ve been appropriately graduated until they’ve received a bonk on the head with a volume of the Gospels—“Thrice,” insists Jonathan Boulton, fellow of the Medieval Institute and concurrent associate professor of history.

Almost 20 years ago, as then director of undergraduate studies, Boulton decided that Notre Dame’s world-renowned Medieval Institute needed a celebration befitting the institute and the field. Borrowing from ceremonies he had experienced at England’s Oxford University, he scripted an induction of students into the society of medievalists.

“We even attract people into the major on the strength of this ceremony,” Boulton said. “They hear about the head-cracking and say, `Oh, well, I definitely want to do that.’”

The nearly hourlong event, Saturday afternoon of Commencement weekend, begins with a formal procession into the perfect venue—the medieval-styled chapel of Alumni Hall.

Bachelor’s degree candidates line the right side of the chapel, master’s and doctoral candidates the left. At the altar, and a nearby podium, faculty officiate first by shedding their usual titles to adapt something a bit more antique. Institute director Thomas Noble is “officiant;” Rev. Michael Driscoll, Boulton, and Alexander Blachly are proctors. Blachly and Driscoll hold the additional titles of beadle and chaplain, respectively. Daniel Sheerin serves as praelector.

Sheerin’s role is the more recognizable: he announces students’ names from a podium, watches as they sign their names into the book of graduates and sees that they receive a wax-sealed scroll certifying their achievement.

Noble’s role is reminiscent of a medieval lord accepting the allegiance of his knights. As each student kneels before him, he first takes their hands between his hands and solemnly admits them to the order of scholars; then he taps them on the head three times with the Gospel lectionary. The ceremony is spoken in Latin throughout, and as he taps them he wishes them “the fortitude of David, the wisdom of Solomon, and the charity of Mary.”

“It’s an ancient Oxford ritual,” says Boulton of the triple whacking. There is no record of exactly why a crack on the head is required, but Boulton notes that many European and British ceremonies birthed during the first millennium involved physical symbolism. Knights, for example, are still inducted with a tap of a sword on both shoulders.

Students are robed in their Commencement gowns and mortar boards. In colorful contrast, the faculty are resplendent in their doctoral robes, the styles that were fashioned during medieval time. Each doctoral program adopts its own color—purples, greens, reds and blues—and fanciful headwear such as Father Driscoll’s purple toque. It’s a squatter version of a chef’s hat, earned from the Sorbonne, as was his sash of purple and gold, offset by what appeared to be white tails of fur.

“The French always did know how to accessorize,” he quips, in the spirit of a ceremony that proceeds with pride and good humor.

And solemnity. It ends with the “chanting” not of Notre Dame’s alma mater but of Salve Regina. Applause then is called for, again, in Latin.

Most of the master’s degree candidates will continue studying for doctorates. Most undergraduate majors will pursue post-graduate degrees in Medieval tudies, theology and medicine. One, though, a double math and Medieval studies major, has taken a job as an actuary. Oddly enough, says Linda Major, director of undergraduate studies, the math-medieval combination is fairly common.

Originally published by Gail Hinchion Mancini at newsinfo.nd.edu on May 19, 2008.