Most everyone has experienced getting lost in a building – hospitals, museums, libraries and shopping malls top the list of structures that leave us turned around and wondering where to go next. 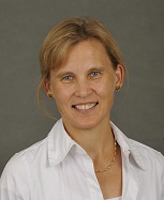 “Our research focuses on three contributing factors: the structure of the building, the cognitive map that a person constructs as they navigate it, the spatial abilities and strategies of the person, and the intersection of those three strategies,” says Carlson, whose research was published in a recent issue of “Current Directions in Psychological Science.”

Some buildings are simply not user-friendly—they may include areas that look identical, they may have corridors that provide little visual access and short lines of sight, and they may be asymmetrical across floors. These features make it difficult to predict where to go and what one might find around the next corner.

Such predictions are made on the basis of one’s cognitive map.

“A cognitive map is an internal representation that includes information about the building that a person constructs as they navigate. The map may include landmarks, intersections, and other salient features of the building. Constructing a cognitive map is sometimes unintentional as a person proceeds through a building,” says Carlson.

Simply noting a picture on the wall, or the location of a recycling bin or a reception area may be sufficient for representing this information in the cognitive map, and this information can be used later to help find the way out of a building. However, research has shown that these maps are not perfect representations, and that there are biases in what information is put in and how that information is represented. These distortions may contribute to why people get lost.

For example, if they turn left at a given intersection, choosing a corridor with a 70-degree turn, they may misremember this instead as a 90-degree turn, and not recognize the intersection on the way out of the building.

“Our research looks at what information people put in their cognitive maps and assesses the accuracy of this information,” Carlson says.

One set of factors that may influence what gets put into the cognitive map is tied to the person who is navigating, and includes spatial ability, strategy, and the immediate context. Research has shown a systematic pattern of cultural and gender differences in strategies, as reflected in the way in which people give directions. Some people prefer to use landmarks, such as, “go down this hall to the phone booth and turn left.” Others prefer to use cardinal directions, such as, “head south down this corridor and then turn west at the next intersection.”

The immediate context also may play an important role.

“Imagine visiting a new doctor in an unfamiliar hospital. You may be running late, or you may be worried because the appointment is to learn of the outcome of a critical medical test,” Carlson says. “It is likely that the stress you are currently feeling significantly impacts your ability to use the building features, the cognitive map that you construct and the strategy that you adopt for way finding, as compared to the scenario in which you are visiting a friend who just had a baby in the maternity ward of an unfamiliar hospital. We are interested in examining how such contextual factors change your experience within the same building.”

Carlson’s research argues that the integration of these three factors and how they intersect are the most accurate measure of a person’s ability or inability to navigate.